My young nephew and I have decided to build a couple headless guitars based on the 7/8 S-style body and 7/8 Warhead neck. His will be painted alder, mine will be natural (1-piece roasted swamp ash). Both will have roasted flame maple necks with wenge boards and white pearl split diamond inlays.

We've decided to use Floyd locking nuts as the string clamps at the headless end along with Hipshot headless tremolos. We're adding piezo saddles to the Hipshot trems and I've ordered those "piezo ready" so they won't have to be modded for the piezo wire slots.

He's going with a cream HSS setup on a black pearl pickguard including a "Bill & Becky" L500L (I think it is) and I'm going with a vintage pearl pickguard and black HH setup with the SD Jazz/JB Trembucker combo. I will be designing/building the preamps myself. I've built many for different guitars with various layouts over the years. For these guitars both the piezo and magnetics will be active. The acoustic side will feature a 3-way mini switch on mine to select from three distinct acoustic tones. He has decided not to use a 3-way mini switch for acoustic tones and will personally select a tone he likes for his. Since I don't normally use a tone control for my magnetic pickups, mine will have just a master volume (for both acoustic and electric) and a pickup blend control along with a 3-way LP-style toggle. He's still deciding on his overall layout but it could potentially have four controls plus a mini-switch along with an LP-style toggle to offer any single pickup or combination along with blending. I understand a lot of people don't like active controls but I've had it on several guitars and like the flexibility. I don't think it hurts the overall tone either. The end circuit will have a great deal of headroom.

We still have to decide on how we'll be routing for the headless tremolo tuner access. I've got a few ideas in mind and will be running a few test routs on a couple old bodies I have. We'll see what happens there but it should help us decide which way to go in the end.

We're both looking forward to it for sure! If these two turn out as I hope they will I will likely be doing another one at some point, though in a different body style. That one, if I ever do it, will be a short-scale headless (without using the 24" scale stuff).

Attached are a couple of pretty horrible mockups. I'm not good with images, but at least they provide some kind of idea what we're shooting for.

Welcome to the forum and good luck with your builds.

As you are going Hipshot have you considered their headless headpiece solutions?
S

I'll try to take pics. I'm old school (you can leave off the "school" part if you like ) and don't have a cell phone to take photos, but my nephew does and I'll have him take pics as things progress. For now, all the parts are ordered except certain electronic components I'll need for the active circuits. Everything is - bridges, bodies, necks, pickups, hardware, etc.

Should be fun! It's my first Warmoth build but I've modded many guitars in the past. I'm not extremely experienced at routing but not afraid of it either.

By the way, if anyone is interested, we're using the American Standard Strat tremolo routing from Warmoth.  I compared the various dimensions of the Hipshot headless tremolo against the American Standard Strat tremolo and found them to be a very close match. The stud bushings are the same diameter as well so that will not need to be changed. There are a few extremely small differences and those may require the tiniest adjustment of the neck alignment on the body which should be able to be done with very thin shims in the neck pocket. It may not require any, but it's a possibility. We'll see how everything lines up, but I'm not concerned about it. That's one of the things I will be looking at closely during the build.

I see. A bit like LSR roller nuts in that regard then.
S

Seems like it. Both my nephew and I have smaller hands and prefer the narrower nut width.
S

Just got the SHIPPED notice from Warmoth! The bodies and necks should be here sometime next week. Cool!

Still have to decide what to do about routing for access to the trem tuners. I've got a couple ideas in mind, but if anybody has any suggestions I'd welcome those.

The only parts we're still waiting for are the two Hipshot headless trems. Those should be shipping soon as well though.

I'm really getting stoked on doing these two builds!  :cool01:

... BTW do people out there still say stoked?... I'm asking so I don't inadvertently embarrass myself at the grocery store...
S

I do, but that doesn't mean anything. :icon_biggrin:
S

The bodies and necks arrived today and they look great!

That's my fault completely, I should have thought of asking where the battery box rout would be.

One solution would be to have a "hole" kind of thing all the way through the body (similar to the "handle" on Ibanez Jems) underneath where the trem tuners are but leave material behind the hole so the outline of the body remains intact. The battery box can simply be routed for somewhere else that works. The only other alternative is to return the bodies (if possible of course) and have them redone without any battery box rout.

It's consideration time now. I think I'd be fine with the "hole" but I'm not sure about my nephew yet.

Another idea for the battery box hole would be to glue a piece of wood in there. Of course I don't know your overall design and plan for a finish but its an idea.

My nephew is planning a solid white or cream. I was going to go natural myself. Once we get together we'll decide what to do.

swipesy said:
My nephew is planning a solid white or cream. I was going to go natural myself. Once we get together we'll decide what to do.
Click to expand...

Cool, post some pictures of your progress as it is usually interesting to see what forum members are doing  :icon_thumright:
S

Oh yeah, I'll be taking a bunch of photos for sure.
S

My nephew stopped by the house today both to check out the goodies from Warmoth (BIG smile!) and to go over our options for the battery box location.

He has decided to plug the hole so we made a plug out of some scrap ash I had and will glue that in tomorrow. Once dry we'll smooth the plug flush with the body. It was a little tough to get a good plug made but I think we did ok. Regardless, once the routs are finished we'll see if we need to patch the back and/or front at all (that's easy enough) and once painted it's not going to show anyway.

As for mine, I have a few ideas but don't really know how to describe them. I could always do one of those "cut in" things similar to the Steinberger GM series guitars but I'm looking to do something a little different.
S

We glued the battery box hole plug on my nephew's body using Titebond III. I have several styles of wood clamps but didn't have one deep enough for this purpose, so I used a trick I've used before with pretty good success - a piece of plywood and heavy bricks. The plug was made taller on purpose for that kind of thing.  Here's a photo of the plug being "clamped": 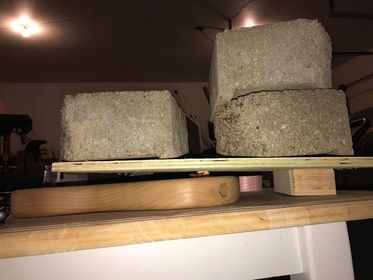 Still have to cut the plug smooth with the body, of course. That will be the next thing we do.

The other thing we did was cut the heads off the necks and sand them. We used electrical tape stretched tight around the cut line to prevent as much tearout as possible. Here's one of the necks taped up: 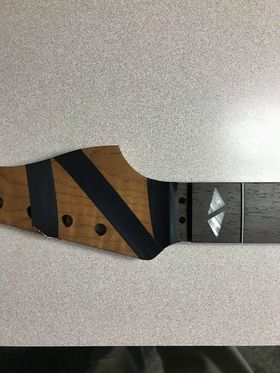 There was absolutely no tearout at all, the cuts were perfectly clean. Here's a photo after cutting using a chop saw with a 40-tooth blade: 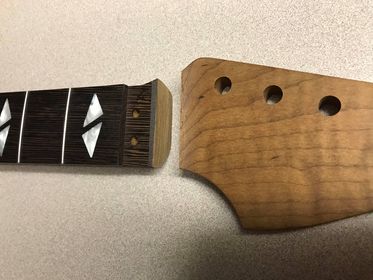 And here's a photo of the necks after sanding: 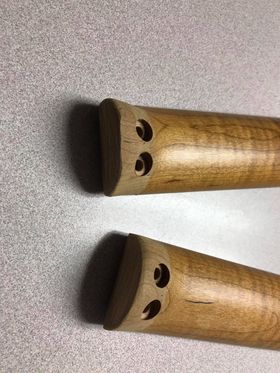 These are unfinished roasted flame maple necks. As you can see, the sanded areas are lighter. From everything I've read I was under the impression that the sanded areas would be the same caramel color but I guess not. Does anyone know if they will eventually turn the same color or will I have to do something about that?

We installed the Floyd locking nuts, and other than the color thing (which really isn't a problem to be honest) those are finished.

That's where we are right now. We can't do anything more on the bodies except smoothing the plug until the trems arrive and we can make a routing template for the trems.

These will be somewhat slow builds. My nephew is a high school senior and what with his school time and work he doesn't have a lot of time available. Plus, I have told him I will not do any body work on my own unless he's with me. This is an uncle/nephew thing and I want him to build his own guitar himself, including the electronics. Even though I'm going to create the schematic and design the PCBs, he's going to be doing all his own soldering. When it's done it's going to be HIS guitar, built with his own hands.

More later. Not sure when though!

These will be somewhat slow builds. My nephew is a high school senior and what with his school time and work he doesn't have a lot of time available. Plus, I have told him I will not do any body work on my own unless he's with me. This is an uncle/nephew thing and I want him to build his own guitar himself, including the electronics. Even though I'm going to create the schematic and design the PCBs, he's going to be doing all his own soldering. When it's done it's going to be HIS guitar, built with his own hands.
Click to expand...

are the guitar electronics going to be complex enough for a PCB?
You must log in or register to reply here.