I'm new here  :binkybaby: but I thought I'd share my first Warmoth build with you for your opinions.
I bought myself a little Christmas present consisting of a neck, body, tuners and bridge all from Warmoth, to go with a pickguard, pickups and controls I already had on a really rubbish guitar.

What do you think?

From Warmoth:
Neck - Showcase - Fatback Birdseye maple with 6150 frets
Body - Showcase - Was plain Swamp Ash, but I asked for it to be painted black with the "8-ball" graphic, just for laughs.  I saw similar on the showcase a couple of years ago, but wasn't in a position to buy, but thought it looked kinda cool.
Schaller Locking tuners
Wilko Bridge

Sweet!  I don't know what it is, but reddish or tortoise pickguards on black guitars always look great to me.  That is a nice looking neck as well.  How do you like the Fatty neck.  I went standard thin on my Strat, but for my next build I think I want to go thicker.  Love to hear your opinions.  Oh, yeah, and welcome to the board!
J

Hi guys, and thanks for your kind words.  :icon_biggrin:

The fatback neck is an absolute monster.  I'm used to slightly fatter necks.  I've got a Les Paul, and a Gibson ES137, which are fairly chunky.  A friend of mine has a Telecaster which has a really big neck, and it felt really comfy in my hand, so I thought I take a punt, and go for the fattest I could get from Warmoth (would have a gone for a boatneck had I not found out about the Fatback)

I'm not really into the shredding thing, so I dont really go for thinner speedy necks (that....and the fact that my fingers dont go fast enough)  I guess I just like to hang on to it and beat it up.  Big frets, big neck, big strings = big tone.
I'd say the whole guitar is a modern feel with a souped up vintage sound courtesy the Kinmans.  Sustains for days cos the bulk of the neck and the swamp ash.  Fairly bright sounding guitar, which is darkened and rounded off by the pickups.
Get One :icon_thumright:


For the record, the pickguard (I guess you'd call it a cross between red pearloid and tortoishell - you cant really see from my pics as I compressed them a bit too hard, which took the detail out along with the birdseyes ), came from a pretty poor Squier strat which had a really skinny neck.  I'd already upgraded the pickups to the Kinmans as the stock ones were pretty poor.  With all that said though, I cant really knock the Squier too much as was really cheap, and served it's purpose really well, it's a great starter guitar.

As for the "8", I did spend ages deciding wether I should get it, but then I figured it'd make it a bit different and no-one else has one.  I must say that there is nothing 'deep and meaningful' behind, I just thought it be fun.  I did wonder wether it would look weird though.....

Cheers for now, and I look forward to hearing more of your thoughts.
All the best

Nice to have another Brit on this board. I'm in based in Surrey.
N

Welcome aboard. I think it's great-- a guitar with a sense of humor!
H

Ooooooooh, Daddy like!  I like the 8-ball theme with the red pickguard.  mmmmm, I might steal that idea from you for my upcoming P-Bass build.  :evil4: :evil4:
J

I just finnished a W build for a buddy, red perloid pickguard on black, it just doesn't get any better, unless you add an 8 ball.

Now that right there is ruddy BRILLIANT idea ! ! !  :sign13:  :sign13:  :sign13:
A good friend of mine is planning a Warmoth build after the success of mine (he sold his MiJ Strat to fund it).  I'm gonna suggest it!
Genius.
Love it. 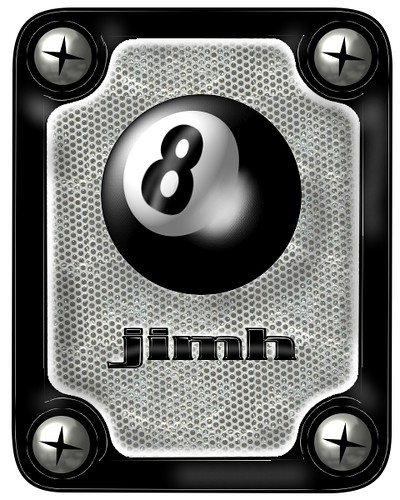 Dude.
That is full on brilliant.
I did'nt realise you were a graphic designer too. I love it.  We need to talk.

CAn you supply the plate?  I think I might seriously take you up on that offer.  I'll PM you.

GET A WHITE PICKGUARD WITH BLACK PICKUP COVERS.  Now that would be sweet!  Or even just a black pickguard with those pickup covers.  And get those little chalk cubes for knobs.
J

spauldingrules said:
GET A WHITE PICKGUARD WITH BLACK PICKUP COVERS.  Now that would be sweet!  Or even just a black pickguard with those pickup covers.  And get those little chalk cubes for knobs.
Click to expand...

Spaulding...... How about a mirrored guard?
I've also seen that I could get some dice for the knobs.  I do like the idea of chalk cubes.  great idea......Where can I get 'em?

spauldingrules said:
GET A WHITE PICKGUARD WITH BLACK PICKUP COVERS.  Now that would be sweet!  Or even just a black pickguard with those pickup covers.  And get those little chalk cubes for knobs.
Click to expand...

Spaulding...... How about a mirrored guard?
I've also seen that I could get some dice for the knobs.  I do like the idea of chalk cubes.  great idea......Where can I get 'em?
Click to expand...

i think these might go better as knobs, just clip off the keychain bit, and drill hole to fit the pot stem....Whatcha think..... ??? 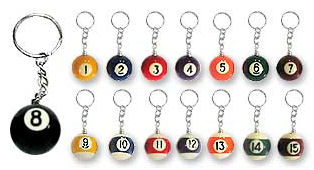 The thing needs to stay completely black and white, if you ask me.  The wood colored neck will look like a cue!  BUT - HERE IS THE MOST INGENIOUS IDEA EVER - white knobs with black numbers that go up to... get this... 8!!!!!

I am so smart.  Bow before my massive brain.
You must log in or register to reply here.