Will this weird Gretsch tailpiece work on Warmoth's Tune-O-Matic route?

I truly appreciate your help. I'm not trying to be a pain in the butt, I'm just trying to get it right. Which do you think would be a better choice, those are these Fenders? On the Hipshots, I was thinking of going for the Classics rather than locking. I've not had any problems with non-locking tuners myself but it could be nice to have locking. The thing is I'm having a harder time finding left handed staggered tuners than I initially thought. I could also just use a string tree on the low E and A and forget about staggered. That wouldn't bother me. I was going for the look of not having one but function is more important.

It really is not the same measurement.

13/32 is not 10mm it is bigger. Really for Hipshots choose the For Hipshots use Schaller / Sperzel (25/64" - 9.92mm) option as I mentioned before. That is also the size to choose for Fenders or Schallers. Most of the problem here is metric dimensions being converted to fractions of an inch.

You would need 6 right side tuners - 3 * 21mm and 3 * 19mm for example you can order the combination needed from Shcaller.

Or a good supplier for Hipshot is Sporthitech, here is an example but if you contact them they are helpful and can provide different buttons etc.

Ok, now I could have sworn on Warmoth's site that the Planet Waves hole was 10mm! It clearly says 10.32. On that Hipshot page, it does say it'll retrofit on guitars with 13/32" though and that is what Warmoth's page lists their Planet Waves measurement as, I think THAT is where I got mixed up in thinking it'd work. Like you said, the metric to imperial can be tough when dealing with such small increments.  I think I'm looking at this stuff when I'm too tired and swapping between too many browser windows at once and it's leading to complete and total brain farts. That's exactly what happened here and I'll get it right before the time comes to order. Fortunately, the only thing I've ordered is the tailpiece so no harm done, other thank annoying myself at such an obvious mistake haha.

Thanks again and thanks for the link. I'm not dead set on Hipshots but that might be what I go for for and I'll definitely keep Sporthitech in mind. That set you posted really looks nice! I probably would go for a different set of buttons but otherwise, they look like they'd fit the bill.

FYI. Hipshot’s are great and has been said you want the Schaller bore. Done enough times. Do NOT get the PL bore.

Yeah, I'm good on that now lol. I see where I messed up but I'm still not sure why I thought Warmoth's measurement for Planet Waves was 10mm. All I can figure is being tired and trying to look at too many tuners to find the right left handed staggered set for something Warmoth offers. That all led to a brain fart. Fortunately, not one that led to ordering anything incorrectly. I already know I'll do a thorough check before making any orders. The tailpiece in question is a bit up in the air but at worst, I'm out 25 bucks but I'll still have the Gotoh that I know will work.

I'm kind of thinking about going ahead and ordering the Hipshots and keeping a note of needing the Schaller bore. The reasoning being that it's in stock now.

Well, it'll work on my Firebird. I didn't string it up with it but I was going to restring it soon anyway so I thought I'd test fit it. I think I may get another later on for the Bird, I really like how it looks and think it fits the Firebird style really well. I took this with my phone so not the best quality. 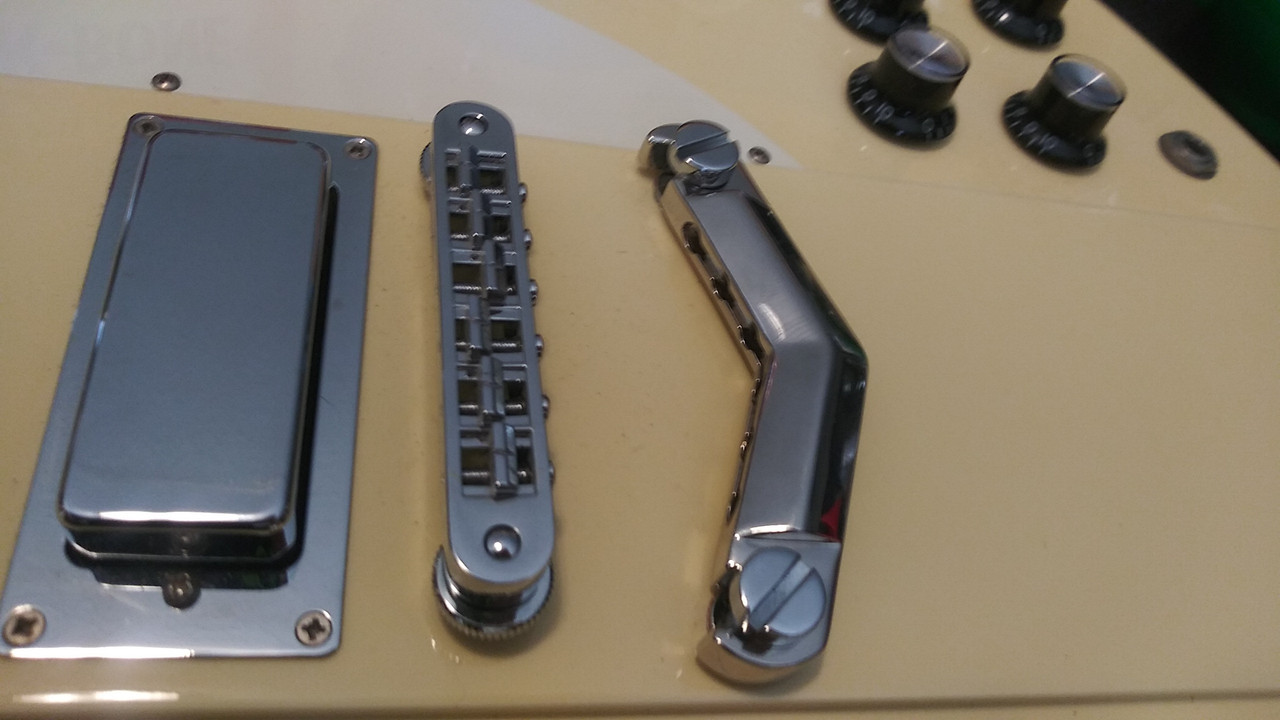 S
Tune-o-matic - tailpiece or thru body?