I'm thinking about putting together a Switchback in the not incredibly distant future and have a question about the string through Tune-o-Matic options. The bridge is recessed into the body and that leaves me wondering if I need the 720 mod for that. I can't find anywhere where it says it's needed and from my thinking, the routing doesn't look deep enough to need it but I thought I'd come in here and ask. I'm still in the kicking around ideas phase and I'm not sure if I want to do a staggered string through or a stop bar.

I'm thinking of this as being a weird alternate universe kind of guitar. What if Fender came up with the Flying V instead of Gibson? I'm thinking of a reverse CBS headstock for the neck but I'm mixing some Gibson in there too. I'm thinking of using mahogany for the body and neck, scale conversion and probably the '59 Roundback profile.

Here's what I came up with on Warmoth's site. This ain't gonna be for everyone but that's the point of doing Warmoth if you ask me... It's gonna get pretty crazy....  :headbang5 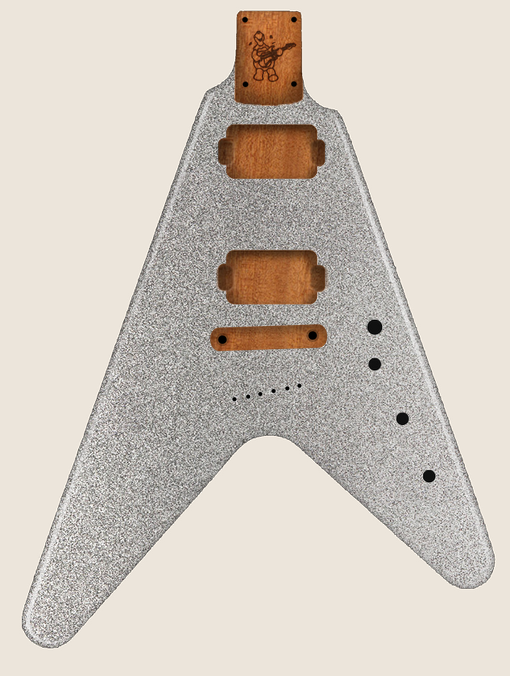 Another thing I'm debating on is dots or Supernova inlays. They'll be Moon Glow either way. 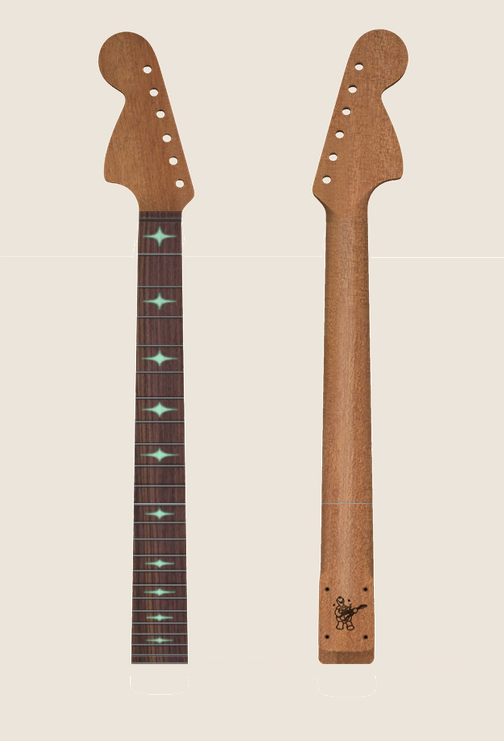 Anyway. i'm a newbie here so thank you for taking the time to read.

Welcome to the forum.

You don't need a 720 mod. Aaron did a video a while ago explaining what it is etc.

Thanks! I didn't know there were videos. I'll look into that more.

I've wanted to put together a Warmoth for years and I think now just might be the time to do it. My idea is pretty out there and it won't be cheap but I think it'll be something I love. I'm not sure if I'll put it together myself or not just yet, I did put together a Jazz Bass parts-o-caster and I'm very happy with how that turned out but that was a very low budget build. The body was a Muslady basswood that I stained and used a rubbed on poly along with a Squier neck from Ebay. The finishing could have gone better but I'm happy with it as a crash course kind of build. This is a little different but I think I'll give it a go and if I need to, get it set up. I've been working on my setup work and I'm a hack but I can get results I'm happy with.

Okay, good luck with the build. If you check the link in my signature there are lots of links in that thread to build guides, tip tricks etc.

Thanks and I will look at the link in a bit.

I've got some things going on that are putting off making an order for a few months  or so and I know it'll take a while for the body and neck to be made but I think it's going to be well worth the wait.

My rationale with purchasing WM products is this: I'm going to be spending the money anyway, so get what I want. It's not going anywhere.  Saving $50 or $90 might feel okay in the wallet at that moment in time, but if I'm rationalizing and sacrificing just for that, maybe a WM product isn't what I should be targeting in the first place.

My V-K is a very similar build to what you're considering (I have a thread about that somewhere here).  TOM bridge, string-through arched, no 720 needed.  Maple neck, ebony board, with black pearloid supernova (for the subtlety).  And gold frets because I'm also all about the obnoxious in guitar design!


(Geez, I kinda' feel a bit like BroRob with all the parenthetical interjections..... )

I understand what you're saying. Sometimes, I can agree. The thing that's stopping me is I'm moving and might need a new recliner. I'm still trying to decide where some things will go and if I do things one way, I'll need to replace a beat up recliner and if I do the other, I won't. I'm probably not going to need to replace it, just haul it to the dump. Still, I'd rather wait until the move is over and I'm settled in before starting any projects. I know it'll still be probably a few months at least before the body and neck are built after I've ordered but I'd still rather wait. Plus, I don't think it's bad to have the time to really think over the details. Some things I feel set on but there are some things I'm still trying to decide on. It'll get done even if I do need a new recliner, it'll just be put off a couple months. Of all the ideas for a Warmoth I've had over the years, this one seems the one to actually do, even though I hated the Switchback at first. It has since greatly grown on me. While I do prefer the symmetrical Gibson V, I don't think I would have done one because it wouldn't be a set neck. Maybe it's just me being a traditionalist but that bothers me on that shape. Yet, I'm perfectly fine with a bolt-on for a Switchback. It doesn't seem anyone here has done one, I couldn't find one anyway. This is an acquired taste kind of shape after all though haha.


Obviously, I can appreciate the obnoxious. I don't always go in that direction for guitars, sometimes plain and simple does the trick but sometimes I just like obnoxious. My idea here certainly doesn't hold anything back haha.

I looked up your V-K, I like it! While not as obnoxious as what I'm planning, it does have a nice bit of it lol. I really like the gold pickup rings along with the black finish and gold hardware. I'm thinking about chrome pickup rings for my Switchback. I'm debating on just going for it with the pickups. I'm thinking about a Dimarzio Tone Zone in the bridge and and Air Norton in the neck and possibly doing chrome toppers. I'll probably just go with black though.

I like the .720 mod if the guitar will not have a pickguard.

Was wondering what the cons are for the 720 mod? In Aaron’s video he says he hates it, but doesn’t really say why. Is it simply the lower string height to the body, or is there something else (besides trem incompatibility) to think about? Having never played a guitar with such a mod (so far as I know) I just don’t have a frame of ref for it. It seems like it makes sense for a non-pickguard build for aesthetic reasons.

One aspect probably comes down to the height of the bridge and the way your hand rests on the strings for palm muting. The height of the bridge saddles on tremolo equipped guitars is already lower than a TOM / stop-tail setup. Dropping the bridge a further ~0.1" may not have a huge effect but is enough to be noticeable. Everyone has different preferences depending on what they are used to. For people who have a preference for particular type of tremolo route and especially the setup, then I can see there are potential issues.

Aaron probably gets a few too many customer enquiries from people who unexpectedly run into the type of issues he explained in the video. If I was doing his job, I probably would feel the same way about it.

Possibly, you may also have some difficulty with some bridges, adjusting the saddles low enough or lower than you may prefer.

Be careful also of screws that may be too long.

In the video, he says not to get it with a Tune-O-Matic. I was thinking string through but decided to try the funky Gretsch V shaped tailpiece I posted about a while back on the parts section, so I'm doing the Tune-O-Matic/Stop Bar route. I've already got the tailpiece and I picked up some pickup rings the other day. That's really it for this guitar being real yet haha.

I haven't abandoned this. I was using thinking about future guitar projects as a distraction to moving stress and moving certainly put this on hold but I still want to make this crazy idea a reality as much as I did then. I've felt settled in for a while not but I admit, I'm having commitment hesitation lol. It's tough to jump into something like this, I can't know how it's going to feel or sound until I've spent the money and put the work in to get it together but that's also the exciting part of it.
You must log in or register to reply here.

Tacoma Guitar Festival 2023 - will Warmoth be there?