Masque of the Red Death

I just ordered some more parts to start this project, as originally depicted in this thread.

Repost pics of the body to start: 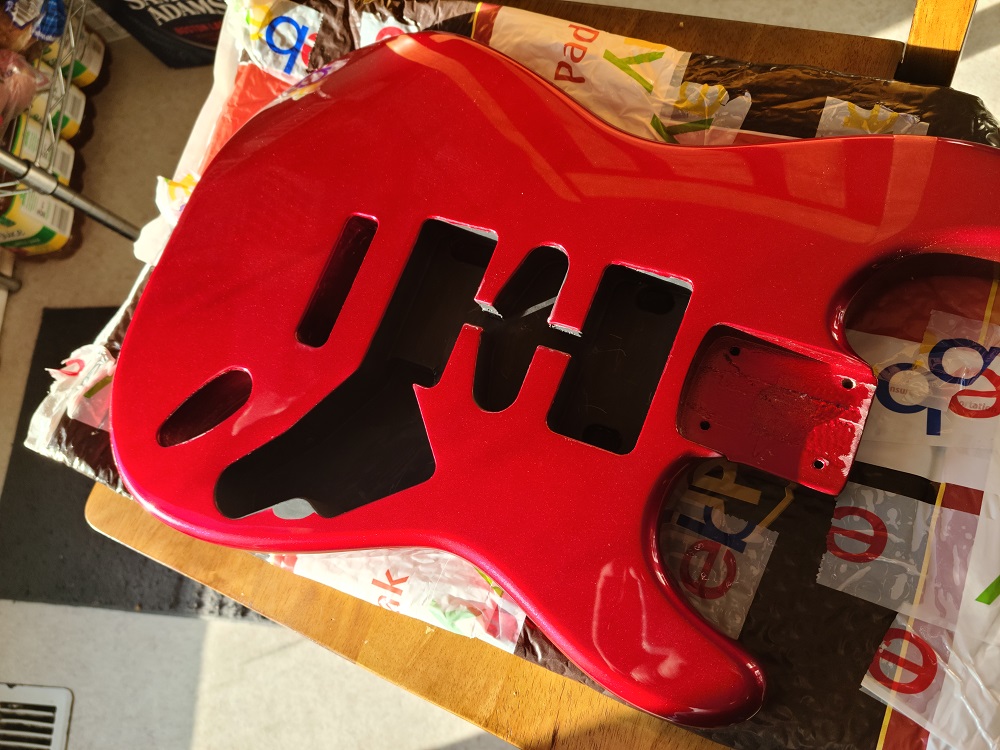 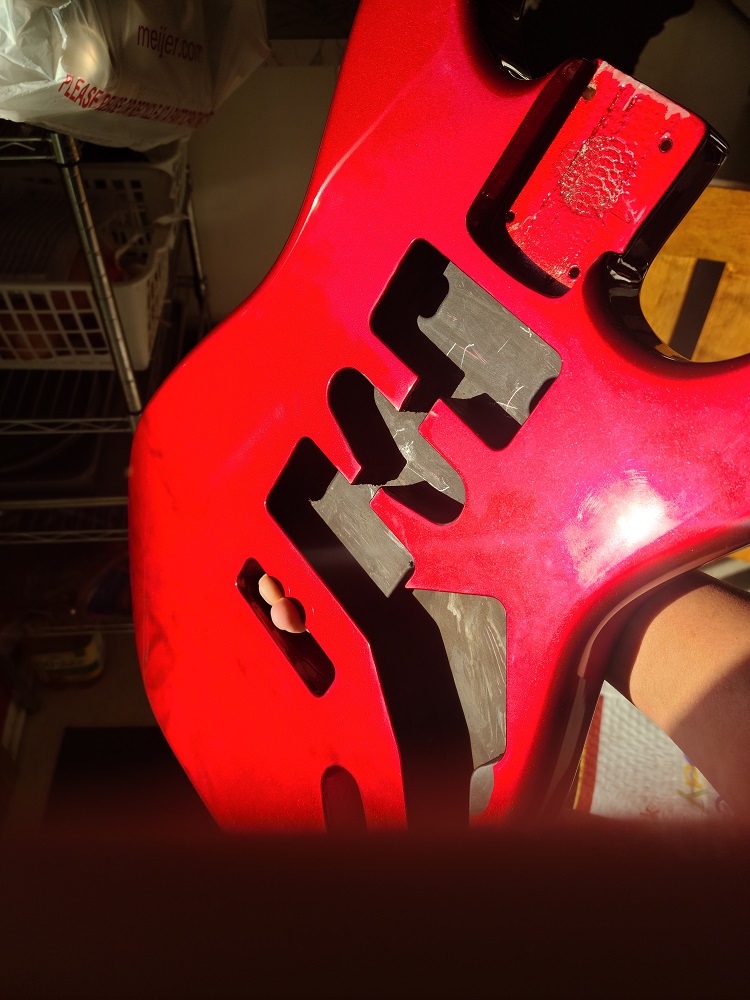 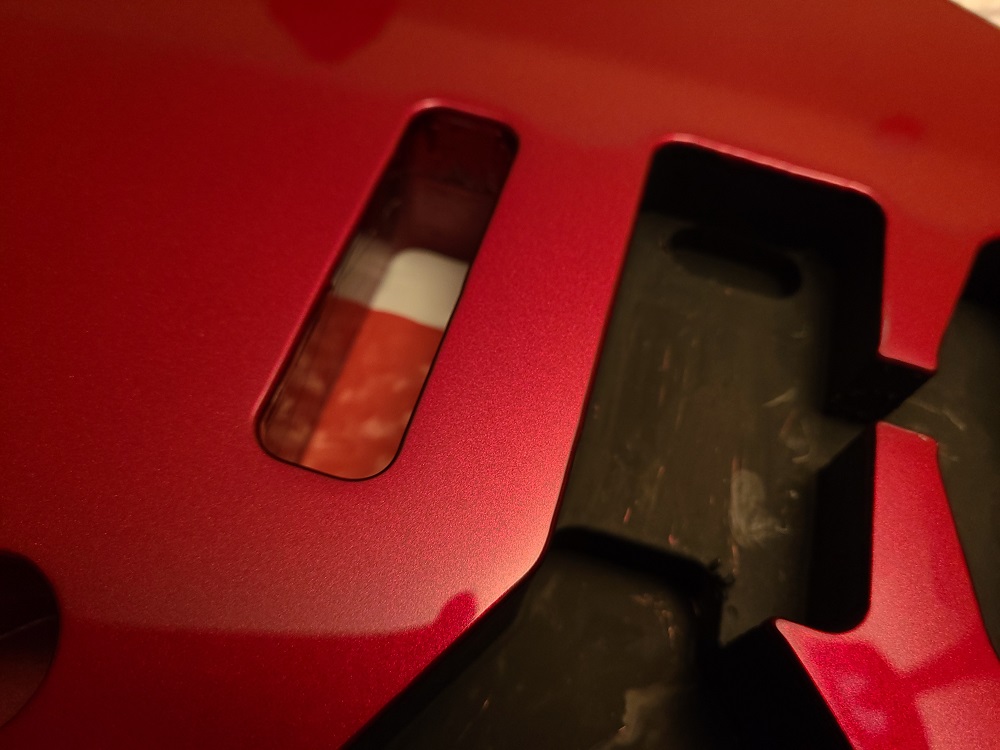 And the mock-up theme:

I decided to go with the transparent pickguard that I'll back-paint in red after applying the final line from the story as the quote:

And Darkness and Decay and the Red Death held illimitable dominion over all.

This will be printed in reverse on my Cricut and applied to the back of the pickguard, then painted over.

Pickguard itself is a loaded package from Dragonfire, two Screamers in red (since I don't have a guitar with red pickups), with single VOL & TONE in the 1.5 and 2.5 positions as opposed to a standard Strat 1-2-3 position.

The bridge is a Gotoh EV510 in black.  I liked the modern look of the EV.

The jackplate is a crafted pewter piece from an eBay seller:

I'm planning to do a black wash coat on it then do some lighter highlights on the raised features to give it a little more contrast. I used to paint Warhammer 40K miniatures decades ago, so it'll be nice to flex that muscle again.

Warmoth bloodwood on bloodwood with black skull-and-crossbones, black Graphtech nut, and black tuners (brand/model undecided yet). I'm going to order it as the Arrow headstock, but cut it to shape. That red semi-circle will be a beveled detail.  I'm not sure if I'll apply some paint to it or not. If the look of the wood is too pretty to cover up, then I'll leave it unpainted.

I estimate the neck to be just over $400, so it'll be a while before I have that much saved; probably not until spring.  Although I haven't been paid yet for a commission I'm building for my friend's son, so that might be a chunk toward this neck....

Then eventually, I'll probably build a guitar that isn't so dark and negative (kinda' 2 for 2 on the evil and gloomy themes here  :icon_biggrin: )

Also, if you can stand some post-hardcore https://www.youtube.com/watch?v=tsojYhAL-kc

Also, if you can stand some post-hardcore https://www.youtube.com/watch?v=tsojYhAL-kc
Click to expand...

Nice! Not my daily-listening style, but I can definitely appreciate its craft.

Why Poe?  He's great but why not Shakespeare with his multitudinious seas incardinine(I know I probably misspelled that).  On second thought red is easier ... Nevermind.

Considering that my wife is more of a fan of EA Poe than Shakespeare.....

Started work on this one when we got to the up-north house this past weekend.  Still saving the money to order the neck from WM, but I can at least work on the body.

Started by printing out the quote in flipped horizontal on the Cricut.  The first pic shows the third iteration because the font choice for the first two times was not a good choice in this application -- too thin, too wispy, and lost detail at the scale I needed and the material of the vinyl.

Pics 2 and 3 are after the decal is applied to the back of the pickguard.

Two light coats of Rustoleum 2X clear was applied over the decal before the Krylon Shimmer (Candy Apple). Two coats of that (#4 & 5).

7: Drilled and mounted the bridge studs.

I'm not sure yet if I'll do a layer of black on the underside of the pickguard to deepen the red.  I tested the concept on a piece of plastic bag and it turned out to be a darker, cherry red.  I have a transparent trem cover plate that I was planning to do the same thing on, so I'll experiment on that.

Just remembered that I didn't post the final pic of the body.

Not all that is Goth is black, as this axe clearly demonstrates.  Looks good, Ned!

About 13 months after starting this topic, Red Death is mostly done.  Setup and intonation still need to be completed but after a big truss rod adjustment, I didn't want to do all of that just to do it over again tomorrow

Also, I have to replace one of the string trees because I didn't drill its pilot hole deep enough.  Maple just ate the screw.  But in the meantime:

This is a really cool and well executed "concept" build. Nice work!

great movie... :icon_thumright:
You must log in or register to reply here.

So I got tired of my Taos Turquoise Strat...