Finished my pedal board, FINALLY!!!

Up and running now. PP2+ under the board powering everything except the Reverbulator (24v). The OCD pedals and MXR flanger are set to 18v, the Analogman Bi-Chorus and Behringer mini mixer are set to 12v, all other pedals are at 9v. Board measures 36x18.

Each of the effects (except the Bad Horsie II, Decimator G-string & tuner) are in there own loops which are "preset" assignable in any combination and/or can be made to be an add-on to an already activated preset. Both of the OCD's are in the same loop, one just feeds into the other. All "looped" effects pedals stay on all the time. All loops are true bypass when not engaged. The switching unit also handles the amp channel switching and amp loop function as needed (loop stays on all the time though). So basically it's "one button" activation for each of my main sounds. The bottom row and one of the upper row buttons are my main sounds. The other top row buttons are my "add-ons" as needed. Stepping on one of the main preset drops the activated add-ons, really simple for stage use. Basically there is the "A" group of loops (7 loops) for the effects before the amp and the "B" group of loops (3 loops) for effects in the amp's effects loop. One thing that I had added to the switching unit was a common return for the "B" group loops. The Reverbulator and both MXR Carbon Copy's are the "B' group. What this allowed me to do was feed both of the Carbon Copy's outputs to the mini mixer which then feeds the "common return". That way when I switch between presets that change which delay pedal (main or long/solo) is active, the previous delay's input is shut off, but the effect's output does not get cut off and naturally decays away. I may go back and set the Reverbulator up the same way, but right now it just loops back in and then feeds both the Carbon Copy's as needed. The mini mixer also allows me to set my solo level a little higher for a solo boost that follows the presets.

There's so much I could keep talking about with this board, but it would get very long winded. So if anybody has any questions about the routing of the effects, or what any particular effect is used for, etc., just ask. It looks complicated, but it's really simple. Power plug on the side is just a male 3-prong. So any 3-prong extension cord works as the power cord.

Couldn't be happier!!  Made a great home for my BYOC Tapping into Voodoo Phull Phaser  :headbang1: 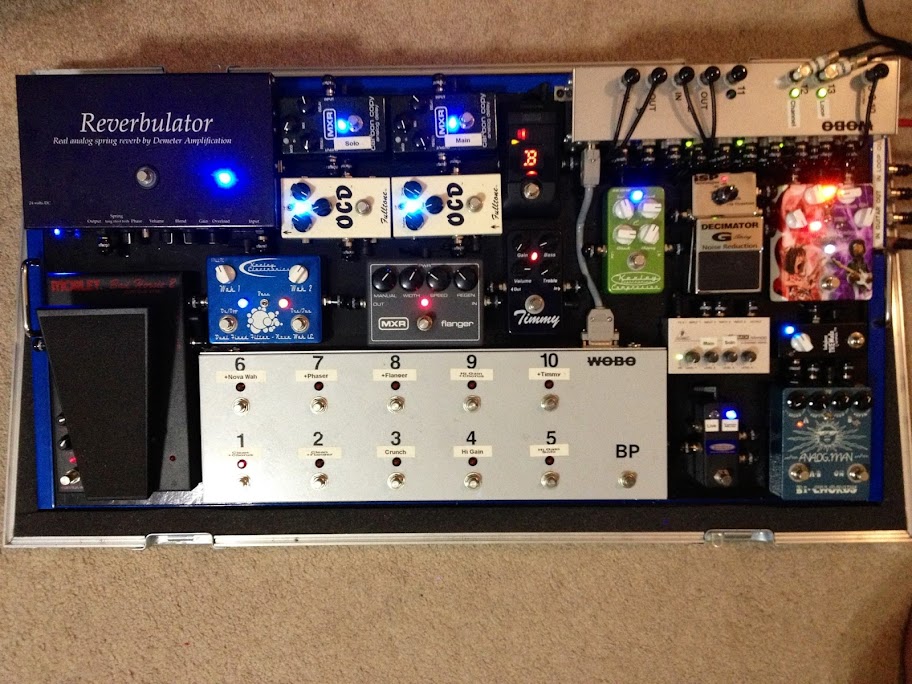 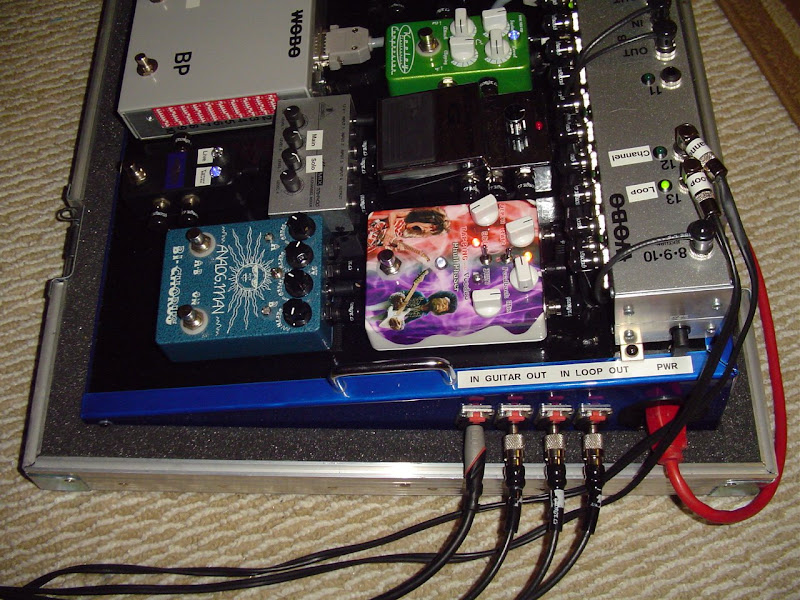 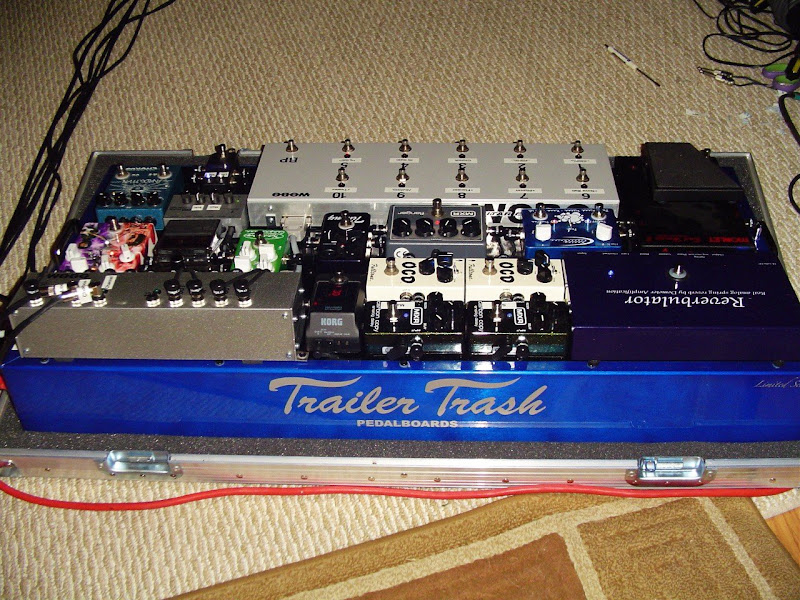 Nice board, but that's way too much to keep up with. All I need is my rackmount...
D

DangerousR6 said:
Nice board, but that's way too much to keep up with. All I need is my rackmount...
Click to expand...

It's really simple, just think of it as an all analog board with out having to tap dance to change sounds. It's "midi" without the "midi".  :icon_jokercolor:

DangerousR6 said:
Nice board, but that's way too much to keep up with. All I need is my rackmount...
Click to expand...

It's really simple, just think of it as an all analog board with out having to tap dance to change sounds. It's "midi" without the "midi".  :icon_jokercolor:
Click to expand...

Well of course it's simple to you, you built it..... :icon_biggrin:

It is cool looking though, really looks like it'd be fun.... :icon_thumright:
E

That thing is really, REALLY impressive.

How do you change the presets?

Also, what is the model of that Wobo? I only managed to find an 8-port box...though that might be enough for my needs...if I could ever afford it.
K

That looks very clean and elegant! Probably the only sensible way to deal with 15 effect pedals too. Nice work!
D

How do you change the presets?

Also, what is the model of that Wobo? I only managed to find an 8-port box...though that might be enough for my needs...if I could ever afford it.
Click to expand...

It's a custom unit I had WOBO build. The units are readily available as 8,10, or 12 loops. They can configure any loop to be a switch. Normally the units are built with half the loops in "A" (effects before the amp) and half in "B" (effects in the amp's loop). They also come stock with 1 channel switch. I had them build a 10 loop unit with 7 loops in "A", 3 loops in "B". Also had them add two more switches and the "common return" for the "B" loops. Programing is really simple. There are dip switches on both sides of the controller pedal numbered 1-10. These relate to the numbered foot switches and all the loops. Just turn on the dip switch for the loop and switch you want activated for a certain foot switch and if that foot switch will be a program change or an add-on to the already active foot switch. It really can't get any simpler.
R

[/quote] It really can't get any simpler.
[/quote]

ummmm.... not sure if i agree with you  :toothy12: mad board, i'll post pics of my homemade ply-wood double tier pedalboard. it's really intense (sarcasm) with its 6 or so pedals  ccasion14:

i'd be scared to use all that gear, but hey, some people think mine is too complicated as well  :dontknow:

to each their own! oh yeah, ridiculously awesome amp/guitar collection  :icon_thumright:

Those cables are awesome.. Where did you get those made?
D

Volitions Advocate said:
Those cables are awesome.. Where did you get those made?
Click to expand...

sorry... The In/out In/out ones plugged into the top of your wobo
D

Didn't read all of the above, but i will say that's once nice switcher you got there partner!  :headbang1:

i'm down to t2 pedals.  A tuner and a green screamer clone.  Thinking about adding a delay.  That looks cool.  Much more organized than I ever was.
S

That's really nice work - as mentioned, since you built it I'm sure it seems easy to you... probably trips out a stranger, huh? :toothy12: I have three of the mini-mixers kicking around, a Behringer 8 and 10 channel and a Samson 8. They're indispensable to me, for looping (RC20XL - FX send), recording, practicing (line in for CD's or computer) setting a mix level for pedals that want to take over, etc. etc. etc.
You must log in or register to reply here.

W
The Gang's All Here!

It's a Pedal Sale Extravagaaaaaaanzaaaaaaaaa!

G
Vote here - 2016 Guitar of the Month Runners Up Contest!