bagman67 said:
It was my late father-in-law's pocket knife, and it was not well-cared-for. But I now have a decent sharpening setup, so I'll attack that along with the other household sharp objects.
Click to expand...

Do you feel that you may be "attacking" the tape on the box anytime soon?!!!😁

We await the great reveal

Hey, is there a moderator following this thread who could move it to the "A Work In Progress" subforum? @The Aaron can you help a forumite out?

bagman67 said:
Hey, is there a moderator following this thread who could move it to the "A Work In Progress" subforum? @The Aaron can you help a forumite out?
Click to expand...

Nope as you have not posted any pics, so it stays here!

Anyway, we return to our project.

Choices made in the name of tuning and stability: Quartersawn maple; tilt-back headstock; 6130 (low'n'wide) frets. If it were my own axe, I'd have gone with the 25.5" scale length, but my friend is a Gibson man and is accustomed to that geometry; so there we are.


What's this? A joke? Where is the neck? My friends, fear not: There is indeed a guitar part lurking within this mound of eco-friendly vegetable-starch-based packing peanuts:

There you are, you little devil!

But let's peel back some of the additional layers of protection:

So sexy. A few close-ups here and there. The broad, unsullied expanse of the paddle headstock:

And the stretch north of 7:

And finally, the heel, perfectly formed and ready to have threaded inserts inflicted upon it:

bagman67 said:
So sexy. A few close-ups here and there. The broad, unsullied expanse of the paddle headstock:

And the stretch north of 7:

And finally, the heel, perfectly formed and ready to have threaded inserts inflicted upon it:

The lumber before milling. As noted earlier in this thread, I think, or maybe elsewhere: I scored some super-cheapo mahogany offcuts from a retiring luthier's consignment to Woodcraft up in the Bay Area, and they've been sitting around in my garage for about 10 years now. In that time, they have served admirably as chocks, clamping cauls, doorstops, weights for carpet corners, and so on. But it is now time for them to meet their highest, best possible use.

And the bookmatched quilt maple top I also picked up for a song - like, $18USD or something like that - because it was stained and bowed? I dunno, I got a pretty good deal. I have stored the maple sandwiched between other materials to keep it/make it flatter than it would remain if left to its own devices. Anyway, the Raw Materials photo:

So I have jointed and thickness-planed the mahogany and cut it to the width I will probably keep it at for the body, but I have not yet glued it up. I am facing a choice, since the mahogany is in five pieces of inconsistent color: Do I just glue up the boards and paint the back with a solid color, to hide the joints? Or do I cut some thin-ish figured maple stringers and make the contrasting joints and patchwork nature of the blank part of the overall look of the guitar? I welcome your input, but make no promises as to whether I'll heed it.

And I took a big risk, and stuck the top down on a plywood sled to take a ride through the planer, since it was in such rough shape. And I have concluded that this was a good idea ONCE, but I won't do it again, since I have some nasty tear-out in a portion of the lumber that will end up getting cut off when I cut out the body, and I don't want to have the same thing happen to any of the surface I expect to keep.

My friend wants a tortoise-shell binding on this, so I'll either put an untinted clearcoat on the maple, and leave it at that; or I'll stain it with nothing darker than an a dilute yellow or amber dye. That brown inclusion on the left side of the lower bout is unfortunate, but this is what you get with natural materials. There's a pretty good chance I'll lose it, or most of it, when I cut the F-hole, anyway.

My friend also thinks he wants a tortoise-shell pickguard, of some sort, but I will probably tell him to go to hell on that one. I mean, LOOK AT THAT FIGURE. I might make a clear acrylic one with a tortoise-shell-bound edge, or something; but who wants to cover up that gorgeous maple?

Yikes! That's pretty freaking cool right there. Looking forward to seeing this one come together.

So the rule is, DON'T RUN HIGHLY FIGURED MAPLE THROUGH THE PLANER. I flouted that rule, and it could have gone very badly - tear-out that renders the stock unusable for its intended purpose being the most likely outcome; but fully shattering the stock could also occur, with potential serious injury to the operator (yours truly).

This photo depicts the tear-out I inflicted on the top for this guitar. The missing surface chunks are in the neighborhood of the neck pocket and cutaway, or a little north of it, so I won't have to figure out how to fill and conceal the damage, luckily.

Next time: Belt sander. Or drum sander, if I build/acquire one.

Oh, and there's enough of this top that I will actually be able to cut a cavity cover from it, and I might even be able to squeeze out a matching headstock veneer. I will keep y'all posted.

bummer man. IMH experience, when ever I use a power tool to save time, it ends up costing me time. That's why, for example, I no longer own a power saw of any kind. And a planer??? forgetaboutit!
Last edited: Dec 1, 2022

Time to get my card-scraper game together.

mayfly said:
bummer man. IMH experience, when ever I use a power tool to save time, it ends up costing me time. That's why I no longer own a power saw of any kind
Click to expand...


Au contraire, mon frere, this is the opposite of a bummer - I could have really screwed the pooch here, but the tear-out only occurred in an area that won't matter. I learnt my lesson cheap, this time.

I will say that sometimes you have to pay your school fees. I'm glad it worked out though!

For the larger ones could you razor off a tiny patch and glue is then sand?

Spud said:
For the larger ones could you razor off a tiny patch and glue is then sand?
Click to expand...

I won't need to. The area with the tear-out is either off the edge of the whole body, or going to be routed out of existence when I do the neck pocket. Luckily I don't have to solve this problem.

Amana Tools rabbeting router bit with various bearings for binding routing. This was a good deal cheaper than the StewMac item, which I believe is the same product but with a few more bearings.

Knobs are from Q-Parts - gold Strat-shaped knobs with tortoise inlays.

Tuners and bridge came from Antique Electronic Supply. As you look at the bridge package, you'll see it has the expected part number for the Gotoh flat-mount 12-string bridge; but those among you who are blessed with the gift of knowing how to count will see it's only got SIX saddles. I got on the horn with AES and they fixed it immediately. Will definitely order from them again. Fast shipping, great service. It's not their fault Gotoh put the wrong part in the package. And the warehouse picker might not actually know the difference. Anyway: Minor annoyance was immediately corrected. 10/10 for post-sale customer service.

The Hipshots are this model. They're VERY light, which is great for a 12-string. Half of them will have the buttons replaced with tortoise. 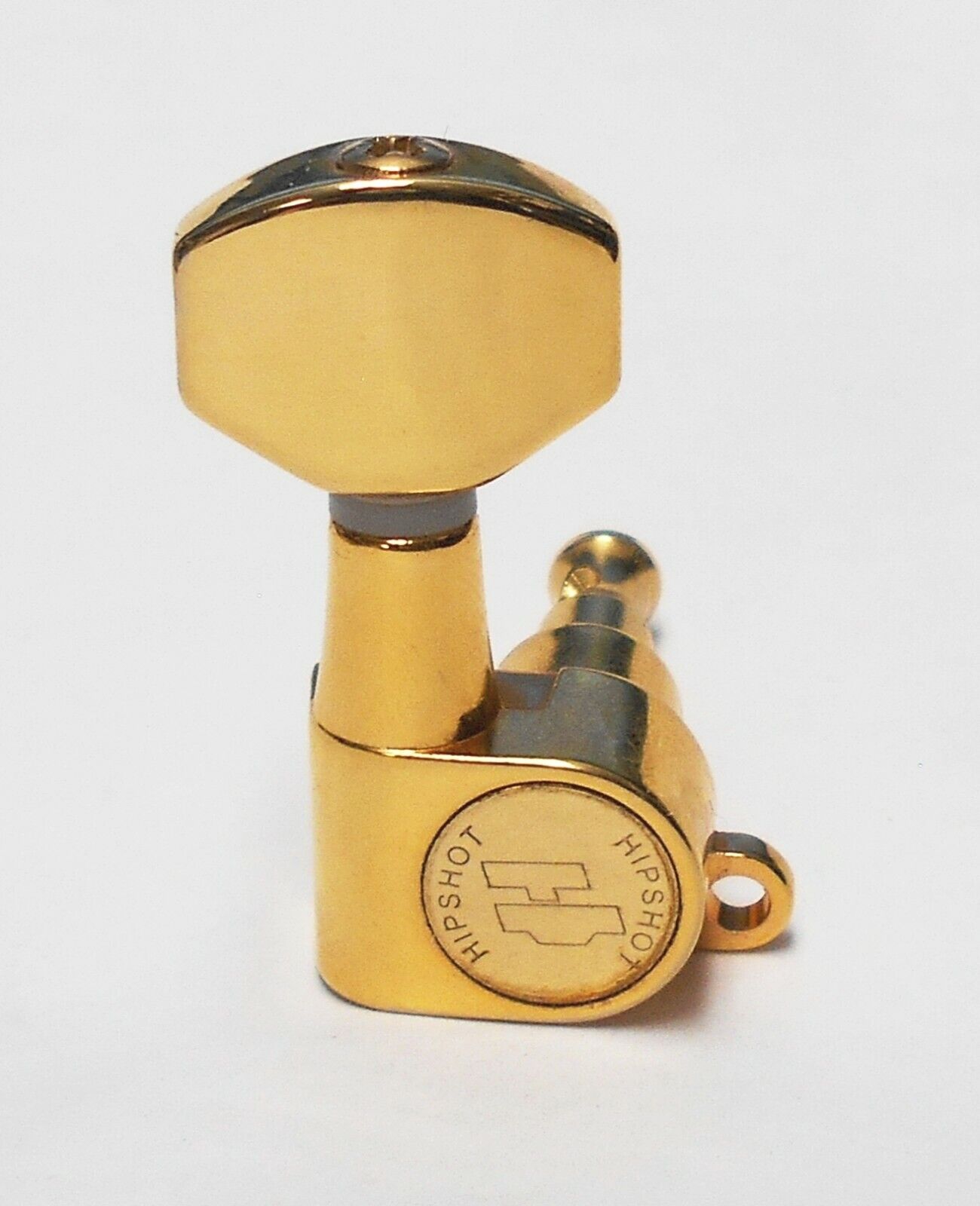 Over the holiday weekend I'll hopefully get some woodworking progress in, but here's a rough draft of the body shape:

The diagram is a little distorted in the photo, since I shot it at a bit of an angle instead of from directly overhead. The bulk of the shape is a tracing of my Taylor GS Mini acoustic, which is actually a nice size for a semi-hollow electric like this one. The cutaway is a tracing from the rim of a cereal bowl.

The plan is to bind the top in yellow tortoise binding, dye the top amber or yellow, and make a pickguard out of yellow tortoise material as well.
Last edited: Dec 20, 2022

very cool! Can we expect more action over Christmas?

That's the plan! I'm pretty stoked to start making wood chips over here.
You must log in or register to reply here.