Here’s Jason’s Tele after the first coat of paste filler.  This is the part I hate the most because it takes a couple of weeks to get it to shrink down and get a level surface.  I like what it does to the color of the wood though. 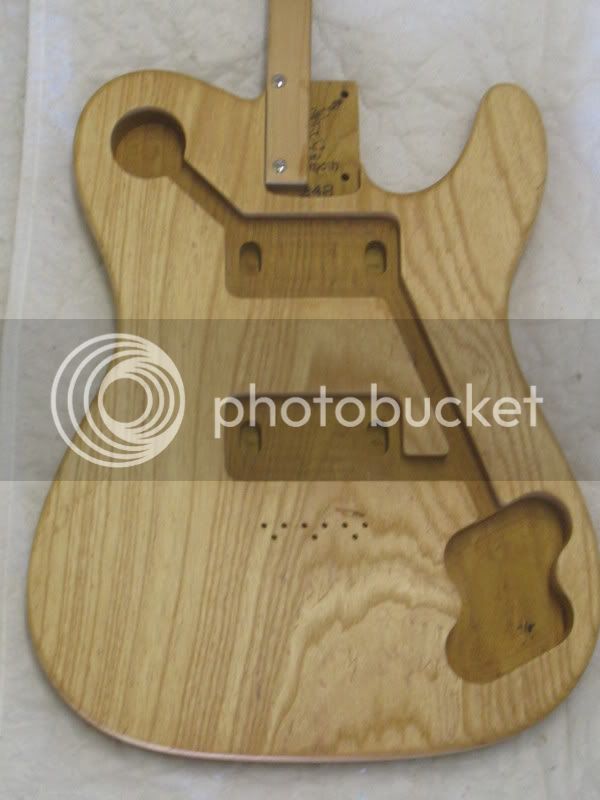 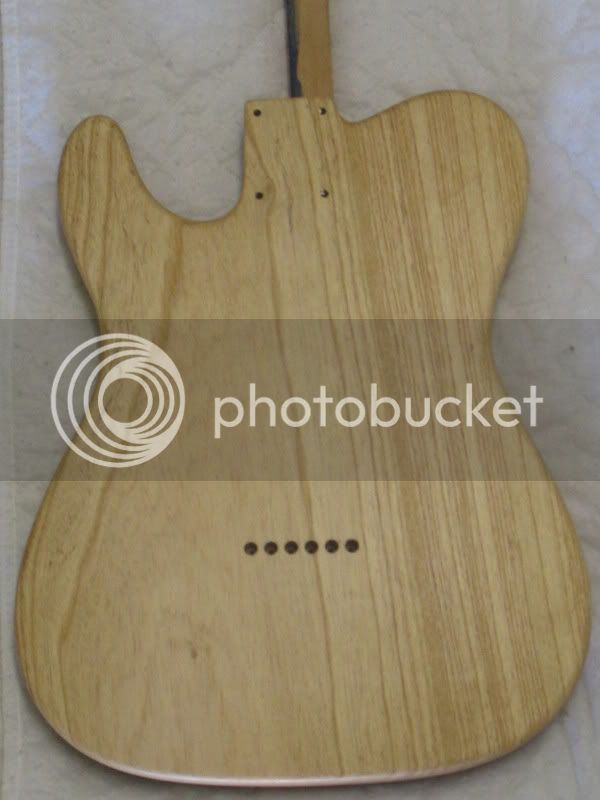 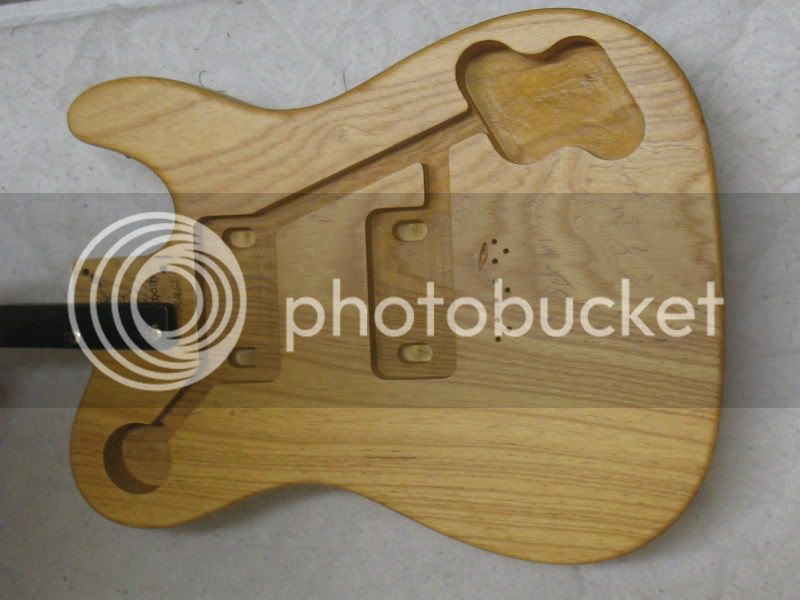 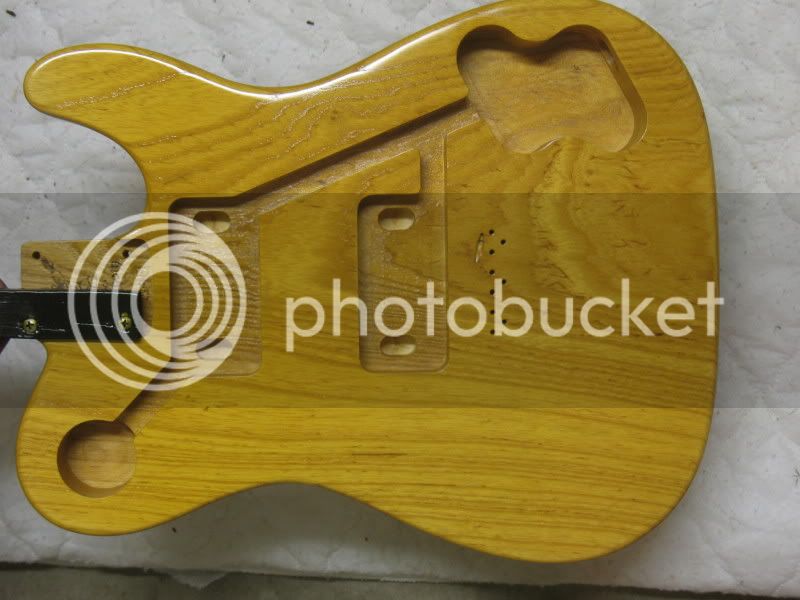 Nice!  I saw you start the other thread, but I was waiting on something like this one.  I'll be taking very detailed notes.  :icon_biggrin:

What color is your paste filler ?  The grains appear to be as natural as they were before filled.

As far as what I think (responding to Tonar's PM), so far so good. Hard to give much input yet, have to see once we get toward the yellowish tint a bit more. The best description I can really give you to aim for is "somewhere between natural and trans yellow." When in doubt, stop adding yellow I guess?

P.S. - Final word on the neck: Warmoth's going to do the overall finish in poly clear gloss, but we'll sand the headstock, decal it, and nitro it from there if you think you can make that work.

Hey, for those of us onlookers: Why aren't you just doing a nitro finish on the neck, Tonar? I remember you asking Doug about neck finishes before. If it's none of my business, then never mind. I'm sure this will amaze.

Hey, for those of us onlookers: Why aren't you just doing a nitro finish on the neck, Tonar? I remember you asking Doug about neck finishes before. If it's none of my business, then never mind. I'm sure this will amaze.
Click to expand...

Jason is going for a specific look of a certain guitar that he likes.  If he can post a picture of it you can see what we are after. I tried to copy the picture he sent me but it was protected so I could not save it to my computer.

All the decisions regarding how the guitar is being finished are Jason’s and I am going to get it as close as I can to exactly what he has in his minds eye.  We decided not to go the lacquer route on the neck because I cannot shoot conventional lacquers over the catalyzed satin that Warmoth is using.  So Jason will send me the finished neck and I will tint the headstock to match his liking and then apply the label and shoot clear over that.

tfarny said:
Hey, for those of us onlookers: Why aren't you just doing a nitro finish on the neck, Tonar? I remember you asking Doug about neck finishes before. If it's none of my business, then never mind. I'm sure this will amaze.
Click to expand...

I went with that decision after a lot of thought for a few reasons. The first is for a lot more neck protection in the long term. Second, it appears that the old Deluxe's may have had nitro on the headstock face only as well (not sure). Here are a couple og examples - note in both cases the difference between the back of the neck and the face.

Now I don't know if these were partially refinished or what, but in any case I think the look works pretty well. I figured why not just have the best of both worlds? It's not like this is going to be vintage-accurate anyway.
P

What are you going to do for pickups? As you surely know the reissue Fenders aren't the Seth Lover design. Somebody (Lollar?) is making an accurate repro, I think I saw - somewhere (?).

I’d say we are right on track to match the color of the Fender.  Look real close at the color of the wood on the back of the body where the finish has worn down to the raw wood.  The wood on Jason’s guitar after it was filled is dead nut to that color.  Life is good when a plan comes together.  :icon_thumright:
M

stubhead said:
What are you going to do for pickups? As you surely know the reissue Fenders aren't the Seth Lover design. Somebody (Lollar?) is making an accurate repro, I think I saw - somewhere (?).
Click to expand...

stubhead said:
What are you going to do for pickups? As you surely know the reissue Fenders aren't the Seth Lover design. Somebody (Lollar?) is making an accurate repro
Click to expand...

All of the guitar's hardware is ready and waiting, most on a placeholder guitar at the moment. They're standard Gibson-size, Jazz neck and a JB in the bridge (with covers). My feeling on the Fenders (not only the vintage cunife magnet ones but even the reissues) is that they have their merits, but they're not right for me. At the end of the day, I'm trying to build a "better" guitar anyway. I'm thinking of it as a "2009" Tele Deluxe, sort of what I imagine the Fender USA Custom Shop might make if they restarted the line today.

Here is the (doomed) guitar. It's actually a crappy Squier (agathis) body which will probably get trashed or ebay'd for $25. Since the pickguard is cut to fit standard Fender/Warmoth routing and the Squier isn't, I actually used a screwdriver like a chisel under the hood, ghetto-style. Anyway, this should give you an idea as to what the Gibby-style pickups look like on a TD. Seems to work fine.

Update: Staring hard at this neck. I won't be able to spring for it for about another week or so, but hopefully it will still be there if I go with it.

1. Posting a pic of something you want makes it disappear

2. The headstock is too big

Max said:
1. Posting a pic of something you want makes it disappear

2. Nah, CBS is the way to go with this. It's a blatant and obnoxious 70's thing much like the guitar itself. Of course I wouldn't put it on anything else in a million years
S

Having grown up at a time when Hendrix & Blackmore had been the leading guitar heroes playing Strats - the big-head ones - I haven't ever been fully reconditioned by the sniffers to see them as wrong & bad. There was a time after Hendrix died when Fenders were not as popular as Les Pauls, at least as lust objects in the eyes of kids, and the vintage thing hadn't kicked in at all. So kids staring at Fender catalogs were staring at big-head CBS models, not knowing that "the old ones were better." I owned one of the original Tele Deluxes for a while, and Steve Morse put a big-head Strat neck on his Telestein monster, so it looks balanced to me... the sniffers sound unbalanced, to me.... :icon_scratch: Peghead weight = tone, in my experience, it can just be inconvenient if you want to dance around on stage without holding your guitar neck up.

My current makeshift Tele Deluxe has a regular strat peghead on it, and it looks off.
S

Tinting an Oil for an Amber/Honey Finish on Maple Neck