I want to build a LP guitar... maybe i would get flamed for this, but i want buckethead's guitar so badly that i want to try to replicate his guitar... it did cross my mind to build my own, but damn! i want that white LP and since there's no signature guitar i would build it, with my own specs of course...

First of all, i have contacted warmoth and they told me that a fully assambled guitar is not their buissness, so i would have to order the body and the neck and hardware and stuff and build it all by myself!!!  That is the first thing that worries me, if i spend a lot of cash on things only to screw things up...

In a perfect world, i spend the cash and have all the pieces and i give it a shot at build it, so this is my idea, (well, not mine, but a replica with my own specs)

As for the neck

i would choose mahogany
fretboard ebony with no inlays
binding in white pearl or something diferent from the alpine white...
the head in full alpino white, also the back of the neck in white too...

Now the trick part is beacuse english is not my mother tongue, i dont quite understand some terms or words...

First of all, i dont understand what is a neck "warmoth pro" or scale conversion... suppose i choose the one called "warmoth pro angled"
then as i said, mahogany with ebony (fingerboard)
the nut 1 11 16
standard thin
radius 10
Now comes another hard part:  24 frets? or binding?  according to the "custom neck wizard" i cant have both,,
frets size 6130
Now, about the tuner hole size, i have no idea about this,,, any recomendation??
string nut: corian
and the finish, i'd like it painted in the same color as the body...


That would be my replica of buckethead's guitar...

Any input on this would be really apreciated..

I'll try to help a little bit.
Warmoth Pro is the name of their particular truss rod design - if you want to replicate a Les Paul look, you should get a 'warmoth pro conversion, LP headstock' and not 24 frets.
As for wiring, two killswitches doesn't make sense to me, though it's certainly possible. Why would you want two kill switches instead of one, unless you don't want a pickup selector switch?
Maybe buckethead uses EMG pickups? Somebody else will know the answer there.
Tuner hole size - Well Grovers are the tuner Gibson uses, but planet waves tuners are better in my opinion.

If you have absolutely no idea how to put together a guitar, either find a good tech in your area or keep on surfing the web - there are a ton of websites that have a lot of information out there. It's really not too hard but you need basic tools and some patience.

Putting a guitar together is not brain surgery.  Frankly, it's just a matter of finishing the wood, bolting it together, attaching the hardware, doing the soldering and then a set up.  At any stage you can have someone help you, like your guitar tech.  Most people have no problem up to the point of soldering the electronics and set up, and they give it to their tech.  No worries.
M

thanks for the grover tip,, i'll check them out as also planet waves!

Yeah, i have no idea how to assemble a guitar... will i have to drill??

by any chance you know if warmoth could send me lets say the body fully painted and with the pickups and hardware installed?? or that is what i will have to do, (except the paint though)...
M

Rick said:
Putting a guitar together is not brain surgery.  Frankly, it's just a matter of finishing the wood, bolting it together, attaching the hardware, doing the soldering and then a set up.  At any stage you can have someone help you, like your guitar tech.  Most people have no problem up to the point of soldering the electronics and set up, and they give it to their tech.   No worries.
Click to expand...

thankyou. but im not that good with certain words in english,, i mean, i dont get what you mean by "finishing" the wood... will i have to mess with the wood??

that guitar body looks really thick - Warmoth's flat top LP isn't going to be like that (I think). 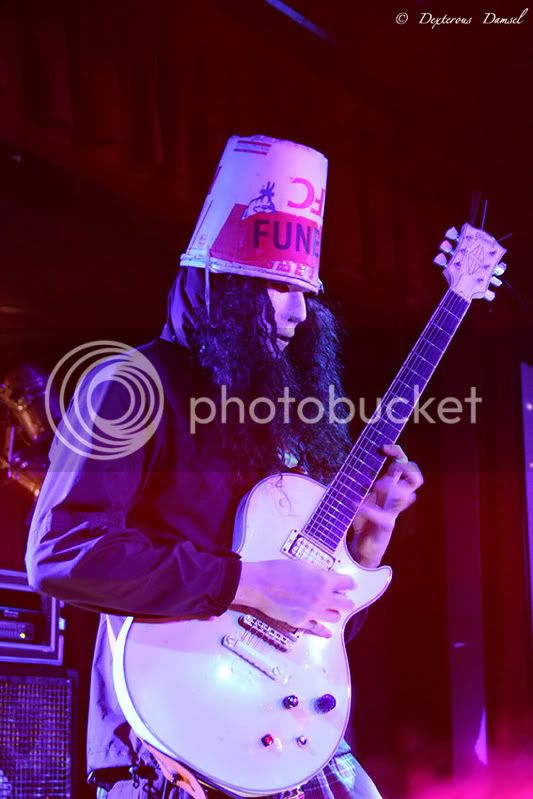 also looks like Buckethead's guitar has 23 frets. I've read that it's 24 but I've counted a few times. Maybe I'm dumb or blind I don't know. :icon_scratch: 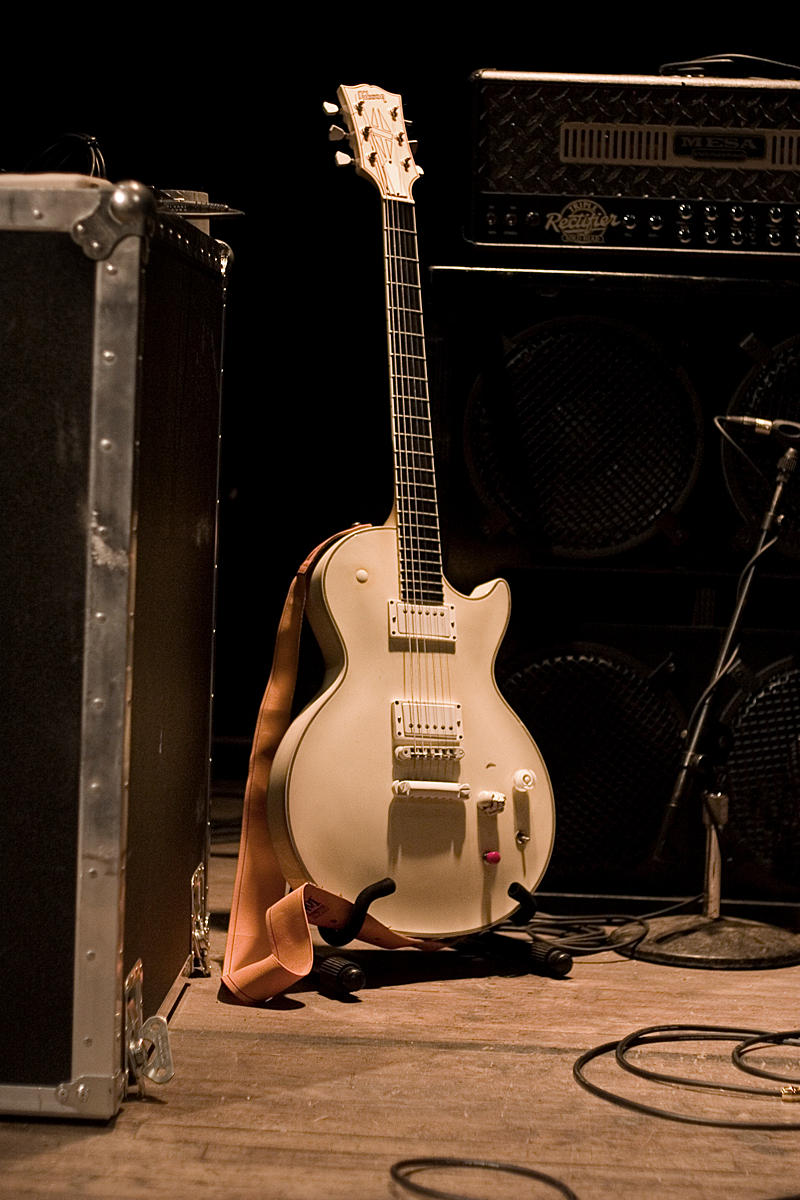 I'd say that's definitely a carved top. I also get the impression that the scale is longer than a standard les paul - not sure though. Other people seem to think that it is. I have no idea. I know he's a really tall guy so...

It's up to you if you want Warmoth to paint the body and neck, or if you (or someone else) will do it. Some types of wood don't need to be "finished" (painted or other protective coating). A Buckethead LP would obviously need to be painted white.

Warmoth will not assemble any of the guitar for you. They do route and drill certain holes, but not all.

They drill hole in the headstock for tuners (but not the small screw holes that are needed sometimes).

they would drill hole in the body and neck, where the neck joins the body.

they drill holes for the output jack, and volume knobs, and toggle switch - you have to specify how you want them.

they route the spaces for the pickups and electronics.

you have to do the rest yourself


go look at a guitar and see all of the parts that go on it. You need to order each part to make a complete guitar. Warmoth will not include the things you need automatically. They provide parts. It's up to you to know what parts you need and acquire them.
M

Yeah, i think im starting to getting the picture here... i do have one more question... so you think his guitar is not a flat top right?  its just that i cant see whetever its a flat or carved...
and other thing,, do i have to order the finish top?  because someone from warmoth told me that the carved top its the same as the finish top,,, maybe im mixing words or not quite understanding what that means ... im more inclined to the 2008 type guitar:

I adjusted the contrast - maybe there you can see the curves a little better.

oh yeah, i can totally see them now,, so its a carved top... like a standard les paul, not like a junior... right?
X

Buckethead's a professional performing artist...  he's bound to have more than one guitar of the same type ( I know he's also got a KFC V )

The 2009/2008 contrast you showed seems to me that one of them is carved, and one flat.  Also plausible.

I've heard that he uses a baritone scale and a larger body, due to his height and reach, but I have no way of verifying it's truth.

Not sure what he uses for pickups, but his V and LP in a couple of older videos look to have Dimarzio X2N's in them, or similar.  Perhaps Dimarzio is the pickup choice - apparently Paul Gilbert had a lot to do with his guitar education, and Paul is a dedicated Dimarzio user.

Other than that, all I can say is that I *think* he's got one speed knob for volume, the stormtrooper knob for tone (not sure if it's hooked up or not), the miniswitch for pickup selection, and one killswitch.

I didn't think his guitars were bound, but that black line makes me think otherwise (though it could just be black paint pinstriping)

i mean, i dont get what you mean by "finishing" the wood... will i have to mess with the wood??

By finishing I mean painting or oiling the raw wood.  You wouldn't leave your car without paint would you? (That's were you save a ton of money by the way)

As for drilling and screwing, just use common sense.

Fear not Marlboro, they'll take good care of you here.  It seems you know what you want, but you're not quite sure what that is.  Since you're wanting a Buckethead replica, but also add your own spin on it, Warmoth is the place.  First off, be aware that Warmoth's are bolt-on necks (not set necks like Gibsons) with Fender compatible neck pockets.  I like your ideas about color and binding.  Once you get all of the parts, there are plenty of places that will assemble it for you....for a price.  There is absolutely no shame in having someone else do this for you.  From the Buckethead pics and what you added for your personal specs, here is my assessment of what you might want.