I believe it's a 45. I'll have to check. I hadn't thought about using some limba for the cover, thanks for suggesting it. I'll see if I can work up a big enough piece, maybe bookmatch some.  :icon_thumright:

PhilHill said:
I believe it's a 45. I'll have to check. I hadn't thought about using some limba for the cover, thanks for suggesting it. I'll see if I can work up a big enough piece, maybe bookmatch some.  :icon_thumright:
Click to expand...

That would tie the top into the back.  :icon_thumright:

Thanks, there are a few places here and there where I had to do some patching to fill damaged spots. don't know if they'll blend in well or not. But overall I'm happy and can live with it.  :icon_thumright:

Considering the way it has to be rebuilt, and because I was glued to the tv when I was young, I am going to call this "The 6 Million VND Tele". *

Progress continues. I wanted to make it usable again but I didn't want to totally spruce it up, so there are still a few dings and scars here and there. That's alright though, scars are part of life and this guitar's life is far from over. I remember reading somewhere that somebody smart once said that "When God looks us over at judgement, He won't look for diplomas, degrees, awards, or achievements. He'll look for scars."
So, anyway this is what we've got so far... 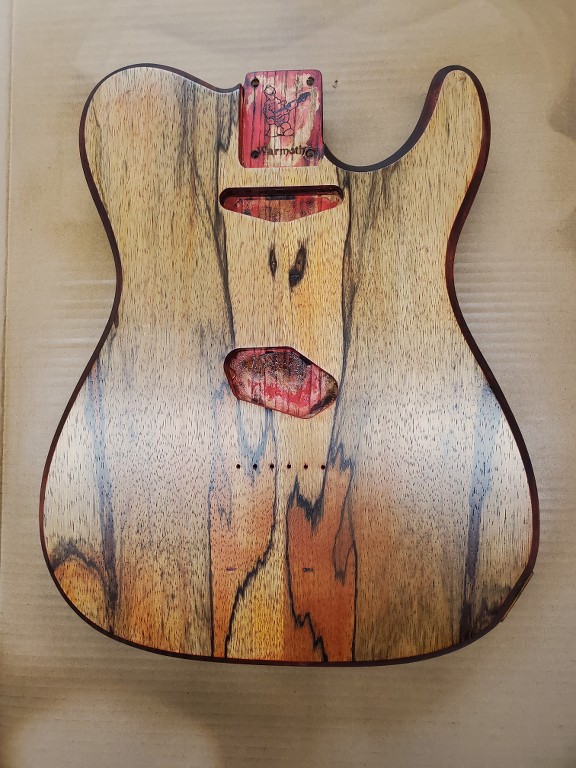 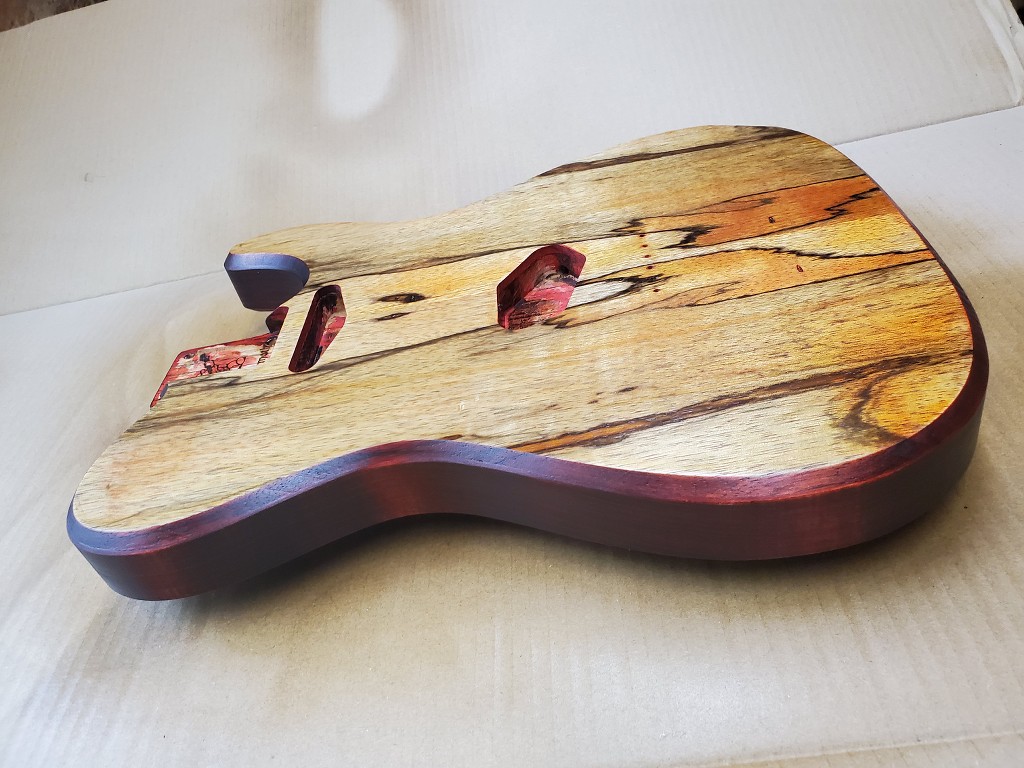 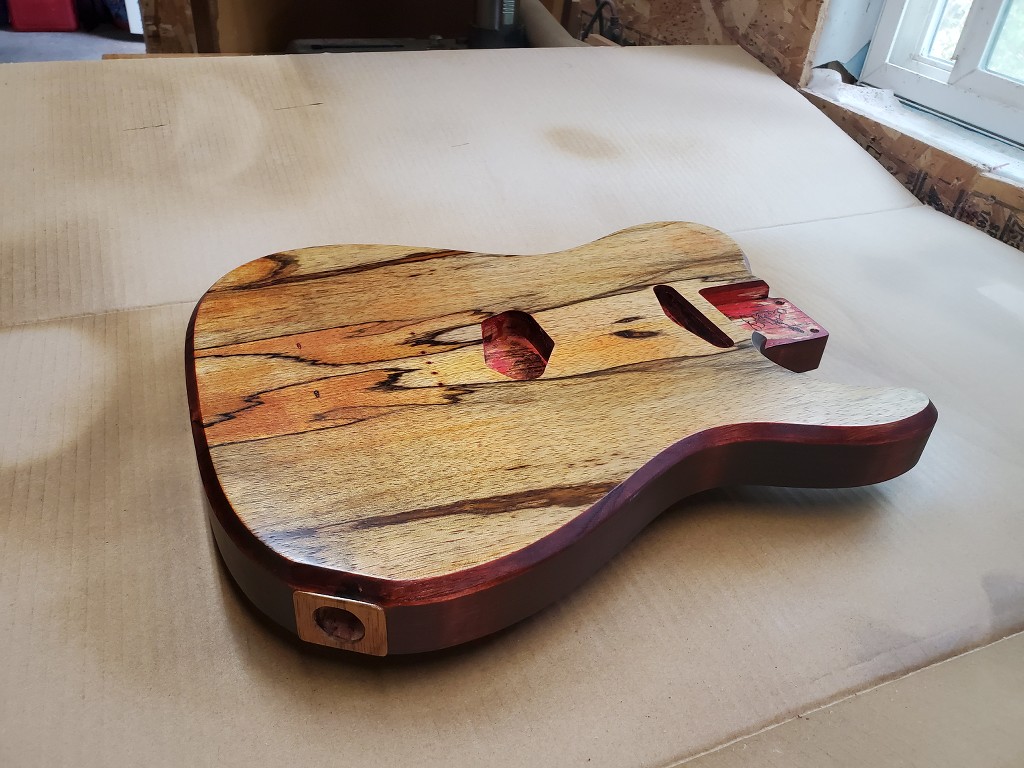 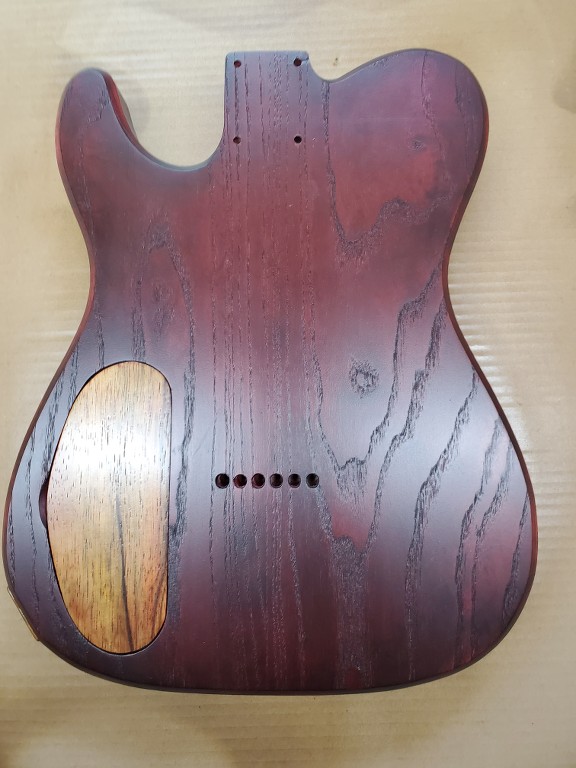 . I have a used Warmoth maple on maple Tele neck that has a scar or two of it's own that I'll probably pair it with. Chrome hardware as the Grover tuners and a few other things from the original are still good and they are chrome. Just need a new bridge, output jack and plate, and controls. So far it has a few coats of sanding sealer on it, that will be followed by 3 or 4 coats of Satin Nitro. Don't think glossy would go with the overall look. We'll see.

Thanks. It's working out fairly well so far, that was a good idea about using limba for the cover. The output jack area was ripped up pretty good from the screws getting yanked out, so I had to patch that and figured why not make it limba too.

I hadn't noticed the jack area patch. Looks good. I can't wait to see the completed guitar. I'll bet your buddy will be pleased.

Absolutely outstanding, your friend should be very impressed... :yourock:

Rgand said:
I hadn't noticed the jack area patch. Looks good. I can't wait to see the completed guitar. I'll bet your buddy will be pleased.
Click to expand...

Thanks All. I shot the man a text to be sure and found, as I thought, that what He meant when He said "I could do with it what I wanted" was that it is mine now. He has video of her destroying it from the time he woke up till she past out. So he figures that she'll be paying for it all. So does his Lawyer. He didn't figure it was fixable and when I sent him a couple pics of what I'd done, He said cool but I should keep it anyway, doesn't want the reminder of what will soon be past baggage.

Well, then. The guy who has it now should be very pleased with it, eh?

That's where I'm stuck right now. I have a maple/maple Warmoth Tele neck that I could use. Or I have to look for something else that is darker. It's a question of contrast or compliment. Not sure which way to go.  :icon_scratch:

If I were to choose a neck for this one, I'd go for wenge because it would accent the dark lines and the open grain in the top. And burnish the hell out of it. That said, it wouldn't be better than maple/maple. It's just the look I'd go for.

Things I really like since last time I saw this, the chaffer with the sexy deep red stain just licking the front end, nice.

Also it's the small things, like the little recess to make it easy to remove the read cover, very cool and clever (damn you, too late for me to add that to mine now....or is it?).

Also, I'm so stupid. On the last tele I spotted the little flat edge on the bottom corner, just thought it was a mistake.

Now I realise that's where you put your jack...

I'm not a smart man.

Dr Excess said:
Also, I'm so stupid. On the last tele I spotted the little flat edge on the bottom corner, just thought it was a mistake.

Now I realise that's where you put your jack...

Vintage Tele's were cut so that they had a flat spot for the jack plate to mount to. I believe it was mainly because of the type of jack plate they used back then. I like to add the flat spot because I use an electrosocket mount and it fits much nicer on a flat surface.
You must log in or register to reply here.