I'm hoping that the worst of my busy stretch is over with and I'll have more time to parcitipate on this board and get back to puttering with a hobby, rather than working an insane amount of overtime. And for those of you who are wondering, the little girl is doing very well and is an absolute riot to be around.

I've always wanted to achieve the sound and guitar of someone I've always idolzied:  Rory Gallagher. As many of you have maybe seen, Rory was always known for his '61 ex-sunburst Fender Stratocaster that had nearly all of the finish worn off of it. I think I'll have good luck with the pickups if I do a trio of DiMarzio Area '61s. What I plan to do for a finish is honestly nothing at all. Instead of trying to do up a sunburst finish and beat it to submission to get the look, I'm going to go with bare wood and allow the body to breathe. The problem that I'm thinking out is how to finish the body. I just want to have a simple oil I can wipe on the body every once in a while to keep the wood from drying out. I thought about using something like an orange-based oil that I could wipe the body down every three months or so, but I think that may be too heavy. Is there anything you guys can suggest?

Thanks for the help!

Hey!  Good to have you back.  I'm going to be a Dad again in a month or so - so then I'll have two boys running around  :toothy10:

Rorys strat - wow - that's gonna be hard to duplicate.  I've heard that he did oil the exposed areas (which was 90 % of the guitar), but I've got no idea what he used.

You know, that guitar just looks .... dirty.  I wonder if you should apply some kind of grey/brown stain first...
M

Yeah, I was thinking a grey-brown stain, or even better, two stains, one sanded back.

And I'm getting a new cousin today, actually.

Did you kill your son Trevor? He was definitely there in the picture you posted.

Yeah, but by "dad again," it sounds like at some point, you stopped being a dad
T

Wow good luck with that. As far as looks go, that is one nasty guitar. Disgusting actually. Don't see the appeal. I would consider getting a nice new nitro sunburst finish on it, then just let it get dinged up as life happens.
As for oiling up the body - you going to take the neck and PG off every three months to apply some oil? What a pain!

The oil you want to use is Boiled Linseed Oil.  WARNING dispose of the rags according to the directions on the can or you WILL HAVE A FIRE.  The boiled oil will protect the wood from moisture and can be reapplied but I don’t think you need to do it every three months.  I have necks that were done 10 years ago that are still fine.

If you really want to nail his tone get a Rangemaster or a Rangemaster clone and run it through a Vox AC30 or a Fender Tweed Bassman.  The Rangemaster is the key you can hear it right way.

PS Use earplugs because the Rangemaster is a treble boost and will tear your head off.  I love them but don’t use them because and an audience can’t handle the pain.

Here is the real deal. 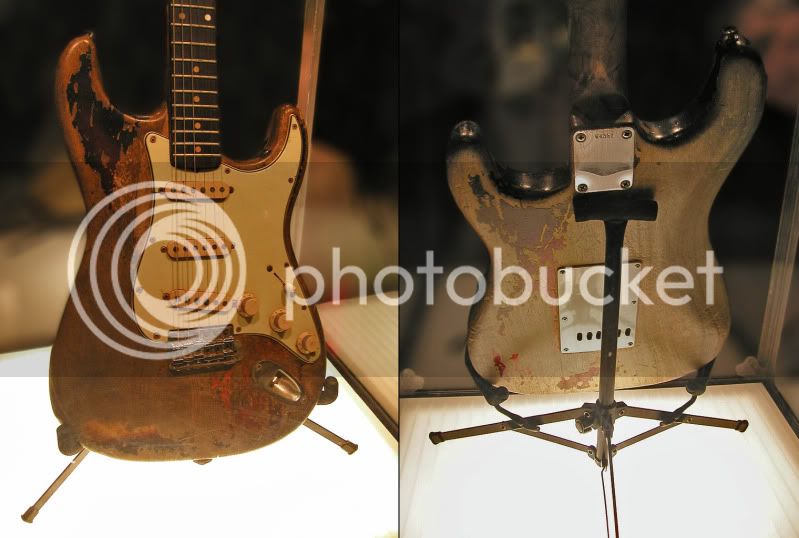 Tonar8353 said:
If you really want to nail his tone get a Rangemaster or a Rangemaster clone and run it through a Vox AC30 or a Fender Tweed Bassman.  The Rangemaster is the key you can hear it right way.

PS Use earplugs because the Rangemaster is a treble boost and will tear your head off.  I love them but don’t use them because and an audience can’t handle the pain.
Click to expand...

Yea, Rory's setup is actually pretty close to what Brian May used/is using.  However, you run it into the normal channel of the AC30 - so it's not as killer-oh-my-god-turn-it-down-im-gonna-die as you might expect.  Plus - who knows where Rory set the cut control on his amps...
K

All good info.  The rangemaster is definitely key, and -if you actually use the tone knob on your guitar - it is not unduly ear piercing.

I wouldn't worry too much about the wood 'drying out' over time.  Dimensional lumber is already about as dry as it is going to get (assuming you don't live in a desert or Antarctica.)  the more common concern is the wood tending to absorb moisture from the environment (and sweat and body oils from the player.)  Although all of that will actually contribute to forming the proper relic patina.

If you wan't to speed up the 'weathering' effect of the raw wood you could try some iron buff staining.

Basically you take some steel wool, wet it, allow it to rust for a couple days, then place it in an open (do not cap it) jar and cover with white vinegar.  Within a couple days the vinegar will react with the rust leaving a clear layer of fluid on top and a gnarly layer below.

The clear layer is what you want (technically speaking it is a solution of ferrous (iron II) acetate.  You wipe it on and then allow it to dry.  The iron reacts with the wood to give it a grey weathered look.  The more tannins naturally present in the wood the darker the effect will be (stuff like walnut and oak will actually turn a deep black.)

Another option is ferrous sulfate tabs from the pharmacy.  Crush some up, dissolve them in water, strain out the fillers/binders, then apply in similar fashion.  Although Ive usually found ferrous sulfate tends to impart more of a reddish hue than the iron buff.

That's pretty cool!  I have to try that some time
T

I am a 100% dyed in the wool Rory fan have been since 1968
and have all his albums plus 100's of bootlegs i remastered
for some of his fans (even Donal knew i was doing it shh) and i also played on the
Rory tribute cd for the Irish youth Foundation.

My idea for a Rory strat was to build a replica but play it in myself
make my own distressed nitro by playing and playing but obviously i dont
have the high acidity that Rory had in his sweat.

here she is as close to 60's spec as i could and never to be cleaned just like Rorys.

I could go on about the great man for months

B
Need advice with satin finish on maple fretboard.

P
A couple of Soloist questions…