I have a Carvin V3M lunchbox head like this: 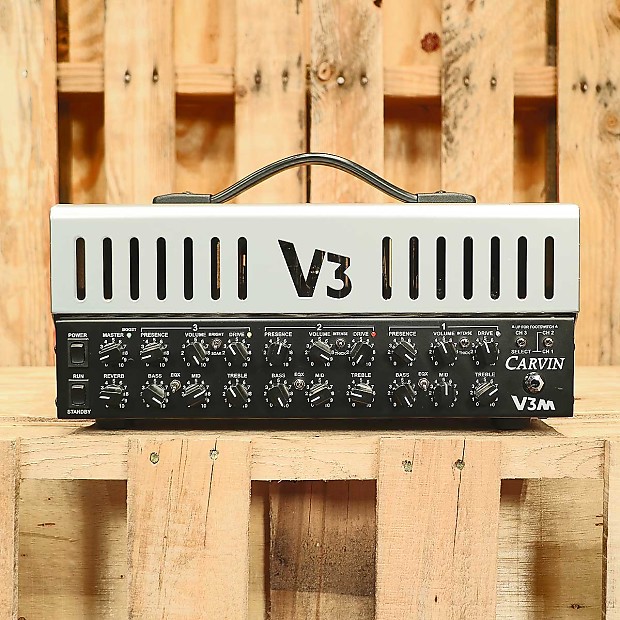 A the photo indicates, the two left buttons in various combinations let you switch between the amp's three channels.  The right-most button engages a boost, giving you MOAR MOAR MOAR.


But the Reverb button, contrary to its labeling, does not engage/disengage the amp's onboard reverb.  In fact, it does nothing.


So my question to you, O Wise Sages of the Tube Amp Mysteries, is this:  How do I troubleshoot this puppy efficiently?


The fastest, easiest part, I reckon, will be check that all four switches are actually connected to the circuit, i.e., the wires are soldered securely to the lugs.


Then  I test for continuity/discontinuity at the switch itself, and if there's no continuity in either position, replace the pushbutton switch.  The part seems to be your basic spdt three-conductor switch.  Does anyone have a preferred maker for these things?


I see from the diagram from CarvinAudio.com that the Reverb switch maps to pin 4 on the 5-pin MIDI cable that connects it to the amp.  So I check for continuity between pin 1 and and pin 4 on the plug with the switch in each of its two states.

Okay, now suppose I get continuity at the switch and at the plug.  Bearing in mind I am not an idiot (allegedly) and that I have a healthy fear of becoming a conductor of high voltages, are there any other troubleshooting steps I, a hobbyist with minimal experience under the hood of a tube amp, can take before I take it to a pro?


I'm not averse to paying a qualified person to do the work if I cannot do it myself.  Mostly I am interested in fixing what is within my powers to fix, while also being aware of my limitations so I don't inadvertently exceed them and kill myself.

Well I can’t see your photo, but being it’s 5 pin MIDI, I presume sine you didn’t mention a power supply, there are no lights on the switch.  Correct me if I’m wrong.

The continuity checks you describe are worth doing, but I would do them at the  foot switch.  5 pin MIDI cables aren’t considered the most robust items LOL.

Since they’re latching (not momentary) and you have the pin routing, should be straightforward

Your basic approach is sound:  Check for continuity at the connector when using the switches.  If something is amiss with the foot-switch, you'll know right away.  If that is the case, you can take the foot-switch apart and mess around.  Note that 99% of the time in these cases, the cable is damaged usually at one of the ends.

If the switch/cable/connector seems fine, then you'll have to take that old tube amp apart.  A qualified tech is your friend here, but don't know who I'd recommend in your area.

As Trevor and I noted, the probable cause is the cable.

If that is the issue, get it here.
https://btpa.com/Midi-Footswitch/5-Pin-Midi/

Don’t waste time effort or dollars on any cable anywhere else.

As Trevor can support, Fractal used MIDI cables for quite a while.  That’s the best source for the highest quality MIDI cables.

My rule of thumb on MIDI cables: get 2 of the best ones.  When 1 starts acting flaky (it’s a matter of time), toss it, use the back up and promptly order 2 new ones.  Repeat ad nauseum.

Well, this may be easier than I expected.


I opened up the switch housing and have two obvious broken connections.


Here are all four switches:

Here is the BOOST switch, which has no connection to ground:

And here is the REVERB switch, which has no connection to the hot signal:

Looks like a straight-up job of resoldering some connections... hopefully.


I got this amp a few years ago when Carvin was shutting down its guitar amp business.  This was one of the last dozen or so in the factory.  It was purchased from the manufacturer's eBay account as-is.  It was delivered in a garbage bag in an unmarked box that had been filled with spray foam around the amp head, along with the footswitch and (I kid you not) a 12-inch power cord.


I'm surprised this footswitch is the only thing that hasn't worked, candidly.  They sold me the floor-sweepings.

wow.  Those are some crappy looking cold solder joints on that thing!  I suspect that they sold the amp, then had to scrounge the footswitch from the prototype pile to fulfill the order.

Agreed.  It looks like a job *I* would have done.

That's the plan, Mister Spud!  Will report back next week when I've had time to do the job.

A
Help with Tele Wiring PLEASE!!