The bluegrass banjo pioneer Earl Scruggs died on 3-28-2012.  His style defined the banjo to a generation of fans and inspired players.  The banjo roll (a three finger technique) was developed by Scruggs. Please read the CBS article below:

NASHVILLE, Tenn. — It may be impossible to overstate the importance of bluegrass legend Earl Scruggs to American music. A pioneering banjo player who helped create modern country music, his sound is instantly recognizable and as intrinsically wrapped in the tapestry of the genre as Johnny Cash's baritone or Hank Williams' heartbreak.

Scruggs died Wednesday morning at age 88 of natural causes. The legacy he helped build with bandleader Bill Monroe, guitarist Lester Flatt and the rest of the Blue Grass Boys was evident all around Nashville, where he died in an area hospital. His string-bending, mind-blowing way of picking helped transform a regional sound into a national passion.

"It's not just bluegrass, it's American music," bluegrass fan turned country star Dierks Bentley said. "There's 17- or 18-year-old kids turning on today's country music and hearing that banjo and they have no idea where that came from. That sound has probably always been there for them and they don't realize someone invented that three-finger roll style of playing. You hear it everywhere."

Country music has transcended its regional roots, become a billion-dollar music and tourist enterprise, and evolved far beyond the classic sound Monroe and The Blue Grass Boys blasted out over the radio on The Grand Ole Opry on Dec. 8, 1945. Though he would eventually influence American culture in wide-ranging ways, Scruggs had no way of knowing this as he nervously prepared for his first show with Monroe. The 21-year-old wasn't sure how his new picking style would go over.

"I'd heard The Grand Ole Opry and there was tremendous excitement for me just to be on The Grand Ole Opry," Scruggs recalled during a 2010 interview at Ryman Auditorium, where that "big bang" moment occurred. "I just didn't know if or how well I'd be accepted because there'd never been anybody to play banjo like me here. There was Stringbean and Grandpa Jones. Most of them were comedians."

There was nothing jokey about the way Scruggs attacked his "fancy five-string banjo," as Opry announcer George D. Hayes called it. In a performance broadcast to much of the country but unfortunately lost to history, he scorched the earth and instantly changed country music. With Monroe on mandolin and Flatt on guitar, the pace was a real jolt to attendees and radio listeners far away, and in some ways the speed and volume he laid down predicted the power of electric music.

Tut Taylor, a friend of the Scruggs family who heard that first performance on the radio in his Georgia home, called it an unbelievably raucous moment "a lot like some of the rock 'n' roll things they had, you know. But this was a new sound. It was a pretty sound and a welcome sound."

Scruggs' use of three fingers — in place of the limited clawhammer style once prevalent — elevated the banjo from a part of the rhythm section — or even a comedian's prop — to a lead instrument that was as versatile as the guitar and far more flashy.

His string-bending and lead runs became known worldwide as "the Scruggs picking style" and the versatility it allowed has helped popularize the banjo beyond the traditional bluegrass and country forms. Today the banjo can be found in almost any genre, largely due to the way he freed its players to experiment and find new space.

That was exactly what Ralph Stanley had in mind when he first heard Scruggs lay it down. A legendary banjo player in his own right, Stanley said in an interview last year that he was inspired by Scruggs when he first heard him over the radio after returning home from military service in Germany.

"I wasn't doing any playing," Stanley said. "When I got discharged I began listening to Bill and Earl was with him. I already had a banjo at that time, but of course I wanted to do the three-finger roll. I knew Earl was the best, but I didn't want to sound like him. I wanted to do that style, but I wanted to sound the way I felt and that's what I tried to do."

Dave Rawlings, a Nashville singer-songwriter and producer, says Scruggs remains every bit as influential and fresh seven decades later. He said it's impossible to imagine nearly every guitar player mimicking Jimi Hendrix, but with Scruggs and the banjo, that's the reality.

"The breadth and clarity of the instrument was increased so much," he said. "He invented a style that now probably 75 percent of the people that play the banjo in the world play Scruggs-style banjo. And that's a staggering thing to do, to play an instrument and change what everyone is doing."

News of Scruggs' passing quickly spread around the music world and over Twitter. Bentley and bluegrassers like Sam Bush and Jon Randall Stewart celebrated him at the Tin Pan South gathering of songwriters in Nashville and Eddie Stubbs dedicated the night to him on WSM, the home of the Grand Ole Opry. On the Internet, actor and accomplished banjo player Steve Martin called Scruggs, with whom he collaborated in 2001 on "Earl Scruggs and Friends," ''the most important banjo player who ever lived." Hank Williams Jr. sent prayers to the Scruggs family and Charlie Daniels tweeted, "He meant a lot to me. Nobody will ever play a five string banjo like Earl."

Neil Portnow, president and CEO of the National Academy of Recording Arts and Sciences said in a statement the four-time Grammy winner and lifetime achievement award recipient "leaves an indelible legacy that will be remembered for generations to come."

Flowers were to be placed on his star on the Hollywood Walk of Fame on Thursday.

Scruggs earned that star when he and Flatt weaved themselves into the fabric of American culture in the 1950s and '60s.

Flatt and Scruggs teamed as a bluegrass act after leaving Monroe from the late 1940s until breaking up in 1969 in a dispute over whether their music should experiment or stick to tradition. Flatt died in 1979.

They were best known for their 1949 recording "Foggy Mountain Breakdown," played in the 1967 movie "Bonnie and Clyde," and "The Ballad of Jed Clampett" from "The Beverly Hillbillies," the popular TV series that debuted in 1962. Jerry Scoggins did the singing. For many viewers, the endlessly hummable theme song was their first introduction to country music.

Flatt and Scruggs' popularity grew, and they even became a focal point of the folk music revival on college campuses. Scruggs' wife, Louise, was their manager and was credited with cannily guiding their career as well as boosting interest in country music.

In the 1982 interview, Scruggs said "Bonnie and Clyde" and "The Beverly Hillbillies" broadened the scope of bluegrass and country music "more than anything I can put my finger on. Both were hits in so many countries."

After the breakup with Flatt, Scruggs used three of his sons in The Earl Scruggs Revue. The group played on bills with rock acts such as Steppenwolf and James Taylor. Sometimes they played festivals before 40,000 people.

Scruggs will always be remembered for his willingness to innovate, but he wasn't always accepted for it. In "The Big Book of Bluegrass," Scruggs discussed the breakup with Flatt and how his need to experiment drove a rift between them. Later in 1985, he and Flatt were inducted together in the Country Music Hall of Fame.

"It wasn't a bad feeling toward each other as much as it was that I felt I was depriving myself of something," Scruggs said. "By that, I mean that I love bluegrass music, and I still like to play it, but I do like to mix in some other music for my own personal satisfaction, because if I don't, I can get a little bogged down and a little depressed."

In 2005, "Foggy Mountain Breakdown" was selected for the Library of Congress' National Recording Registry of works of unusual merit. The following year, the 1972 Nitty Gritty Dirt Band's "Will the Circle Be Unbroken," on which Scruggs was one of many famous guest performers, joined the list, too.

Scruggs had been fairly active in the 2000s, returning to a limited touring schedule after frail health in the 1990s. In 1996, Scruggs suffered a heart attack in the recovery room of a hospital shortly after hip-replacement surgery. He also was hospitalized late last year, but seemed in good health during a few appearances with his sons in 2010 and 2011, though he had given up the banjo for the guitar by then.

Scruggs' funeral arrangements are incomplete. He's survived by two sons, Gary and Randy. Louise, his wife of 57 years, died in 2006. He often talked of her, recounting how their eyes had met while she watched him perform at the Ryman, and friends noted a sense of melancholy in Scruggs over his final years.

Bentley attended Scruggs' birthday party in January and had a chance to pick one more song in a circle with the legend. He even snapped a picture with his 3-year-old daughter, something he says he'll cherish forever.

"I think Earl was ready to go see Louise," Bentley said. "I think he was ready to go. But we're lucky. We've got a lifetime of his music that's recorded to listen to and he's in a better place."

Very sorry to hear of the passing of this great man.

A true legend and music pioneer.  He will be missed.
J

He was the man.

You can not write enough about this guys talent
he was a very great banjo player and what we consider great banjo playing he developed
The Jimi Hendrix of Banjo
A long and acclaimed career has come to an end
Sad to see him go, glad we had him for so long
Heavens choir just got a an new soloist
U

Yep sure was a pioneer  :icon_thumright: 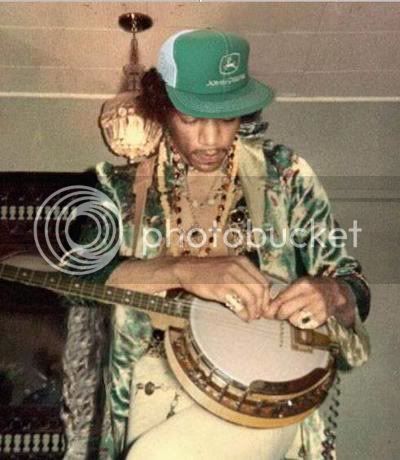 What a lineup  :headbang1:
He truly was a pioneer and an inspiration to so many.
He will be missed.  RIP Mr. Scruggs...