these are still the seller's pix, cause I haven't hardly DONE anything to it yet:

There were a few things that attract, the maple neck-through: 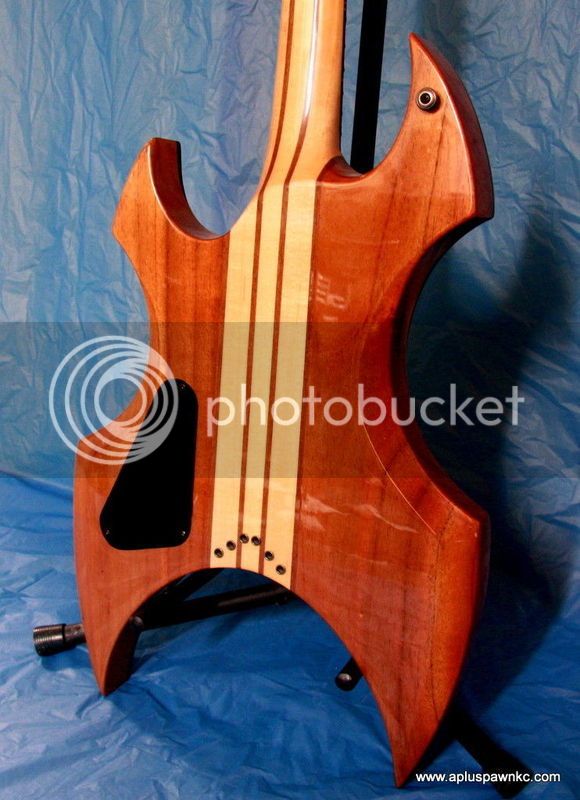 Through my own experience and a few DOZEN guitar stoodrunt's guitars I've seen that Schecter guitars were just about unbeatable in the $400-$800 (or so) range, you MAY luck into a good Epiphone or BC Rich or... something, but the QC on the Schecters was so fine I wanted to see what their sisters at ESP were doing - same ownership, same philosophy, somewhat different models and production lines. And this one has been upped with at least one great pickup, Seymour's unabashed steal of his guru's L500XL - 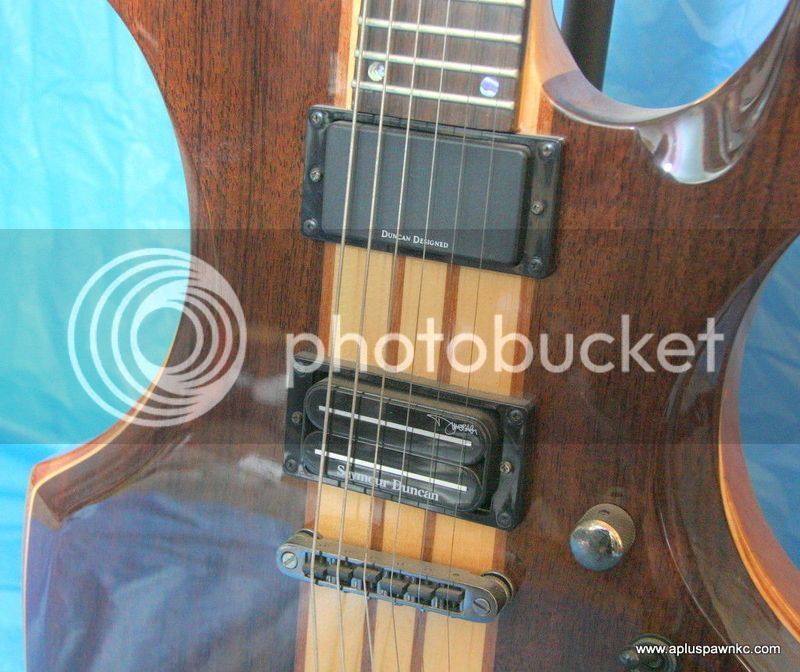 Although, the stock wiring was supposed to coil-tap both pickups when you pulled up the tone knob - which is sort-of dumb, series-parallel is far more useful and especially when you can do the pickups separately and have separate volumes too. Right now the mixed-PU wiring is a little LOT weird, I just have to think my way through it, I imagine I'll end up with two mini-switches doing series-parallel and a V-V-T arrangement. The case was a selling point, these weird ones, well...
(anybody got a spare Peavey Mystic case?) :toothy11: 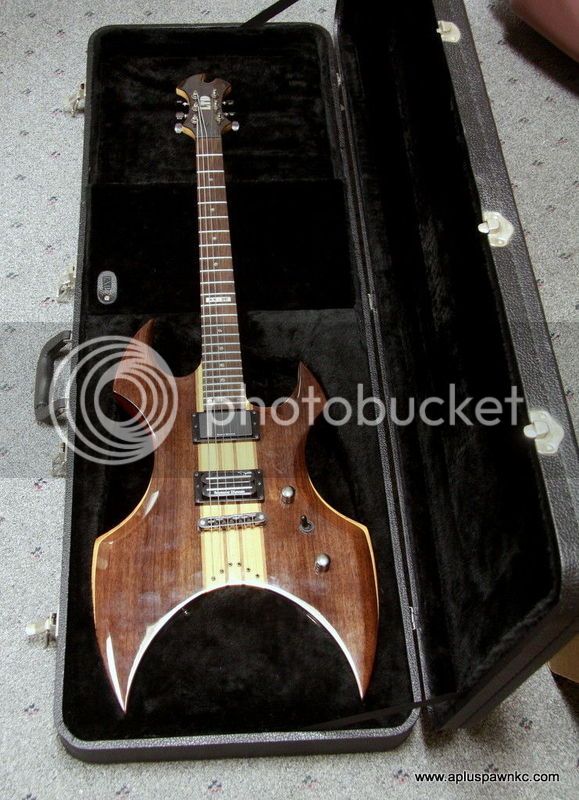 As well as the maple neck-through, other attractions were... the country of origin - Vietnam! In ranks of zoom, Japan stands high, some really nice Schecters are Korean, I've seen many other nice Korean gits, the quality of Chinese guitars depends on, ummm, their quality, Indonesia gets iffy, but Vietnam? One way to find out... All the woodwork looks fine to me, as the electronics have been fiddled I can't say, all the alignments and all are spif enough - the original bridge had been "upgraded" with Graphtech saddle inserts, half of which were cracked and wobbly, so I had to drop another $25 on a real bridge (If your bridge saddles munch strings there are better ideas than plastic saddles IMO).

Now I am certain that the three biggest neck chunks are maple; the "mahogany" neck stringers aren't the same wood as the "mahogany" body wings, and the "ebony" top cap and headstock facing aren't the same "ebony" as the "ebony" fingerboard. In fact the fingerboard could well be (reasonably dense) black rosewood and the top is, ummm, ASIAN ebony? Maybe it glues to the "Asian mahogany" better.  :icon_thumright: But you grab the headstock and crank it around and the tuning barely wiggles, and after I did a cursory level/dress'n'polish the frets are now just super. So the initial impression is:
1) Surely adequate-to-fine woodwork;
2) It "plays" really BIG! Not noticeably heavy, just... BIG! Wide, deep etc.
3) It's really, really, really shiny... hello, white plastic steel wool & Micromesh - just for now, heh-heh. :evil4:
4) the headstock is kind-of hideous, just unaccountably UGLEEE. I would not be shocked if somewhere down the road, that gets SAWED off towards normal, all the body edges get rounded off considerably and the SHINY finish get replaced way towards matte-iness.

But it plays fine, and as it's about as completely UNlike anything else around here it's a keeper. I've already had two 'rons tell me it's a "metal" guitar, but I have no idea what they're talking about - it likes blues & Bach as well as anything else I own? There are always mo' rons around than you can shake a stick at. Or an ax.

Congrats on the new axe. Lots of hours of playing left in that one. Be sure to post any improvements you make.

I hear that these things are really great for aerating the lawn.
A

Nice axe (and that's the kind of guitar where the term is actually appropriate!).

If you want to hide it from your significant other, just put it between the salad fork and the shrimp fork .... nobody will ever notice!
D

Nice score!  I have a couple of Korean BC Riches that play incredibly well.  ESP always did make good stuff, but admittedly I am not too familiar with the LTD line.

AndyG said:
Nice axe (and that's the kind of guitar where the term is actually appropriate!).

If you want to hide it from your significant other, just put it between the salad fork and the shrimp fork .... nobody will ever notice!
Click to expand...

Ha I was just thinking that. It is pretty awesome!

These type of angular guitars always remind me of Klingons, that said play long and prosper.

The most angular I ever got was a Hamer Blitz, Explorer shape with a Floyd Rose back in 1985.

stratamania said:
These type of angular guitars always remind me of Klingons, that said play long and prosper.
Click to expand...

It does have that cool Bat'leth look to it. They were made of heavy metal, you know.
M

I think that was the guitar the Jackson 5 used in their album.

stratamania said:
These type of angular guitars always remind me of Klingons, that said play long and prosper.
Click to expand...

It does have that cool Bat'leth look to it. They were made of heavy metal, you know.
Click to expand...

:icon_thumright:
You must log in or register to reply here.

O
Some guitars I have made over the years
2