I'm posting this in General because even though the body and neck are not Warmoth parts, all the hardware, including the pick guard, did come from Warmoth.  The pickups and tremolo came from eBay.

Any way, this guitar started life red with a black pick guard.  At least thats how it came to me.  It is a mid to late 80s Made in Japan Squire Stratocaster.

My dad has done auto body work as a side job on and off for years, so some time around 95/96, I had him refinish the guitar.  At the time we had just finished work on my 68 Mustang fast back which we painted a color called "Mulberry Wine".  It was a 3 stage color with a copper metallic base, a trans purple mid coat and then clear.  We had some of the purple left over, so the MIJ got a silver base, the purple mid, and clear.

Being ridiculously impatient (I was in high school at the time) I started sticking things back together way before the finish had set to a reasonable degree.  The result was that I drug the paint in a few spots and the pick guard smooshed the finish (yes, thats a technical term) and stuck.  The sticking would not have been so bad, but I had to remove the guard for some reason.  It was a gaudy ass mirror finish pick guard, and some of the mirror foil stuck.  Also, the screw holes didn't line up perfectly, and I managed to crack the guard in two places.

After that, I sorta just beat the hell out of it for the next few years.  Stupid stickers, duck tape over strap buttons, you name it.

Recently I was inspired by tfarny's strat rebuild (http://www.unofficialwarmoth.com/index.php?topic=2150.0) and decided to go ahead and rebuild the MIJ.  I decided to go with Fender Vintage Noiseless pickups because I want this to be more of a "Buddy Holly" strat.  I used a Wilkinson VSVG tremolo as it was the only thing I could find with modern saddles and a 6 hole mount.

As for the color, I let my 5 year old son pick it   (Thats how I convinced the wife to green light the project).  He said "sparkley blue", so thats what I used as my base point when selecting it.  I ended up going with a 3 stage urethane product from PPG.  The base is a metallic blue with a hint of purple to it, then the mid coat is a trans blue with a multi-color pearl in it, then a final clear coat.

Any way, enough yacking, here are the pictures!

I forgot to take some before starting, so the pickguard and such has already been removed in the first ones.

"Purple is not a boy color" - Jayson Rhoades age 5 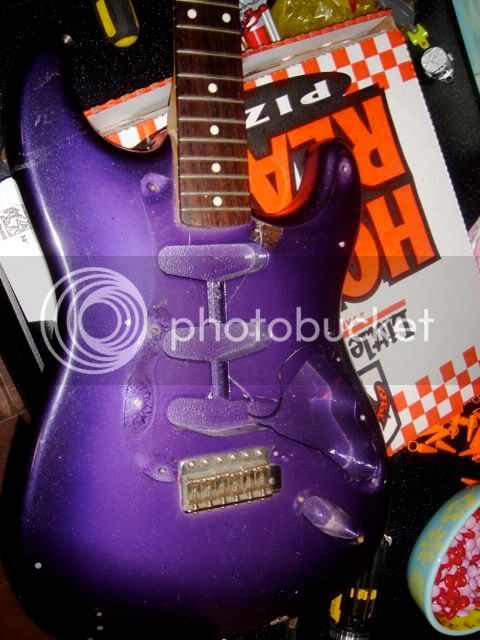 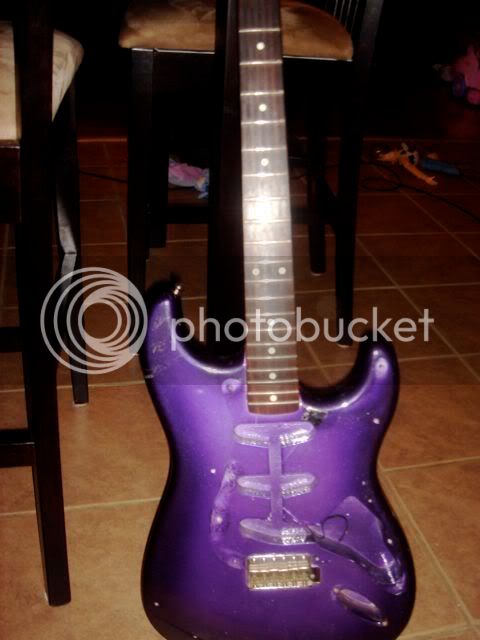 Ripped off the old finish with 60 grit. 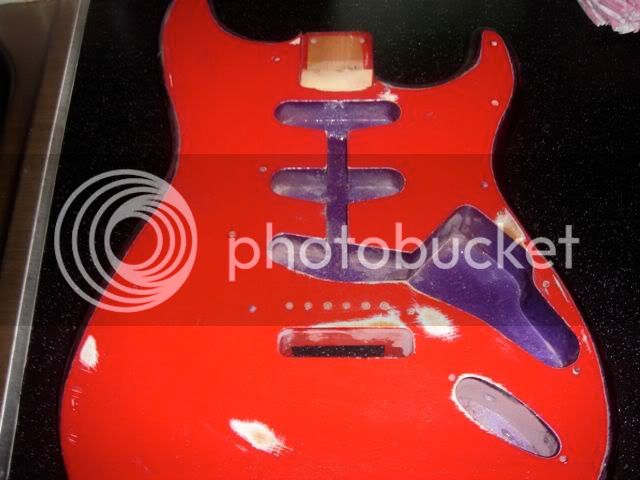 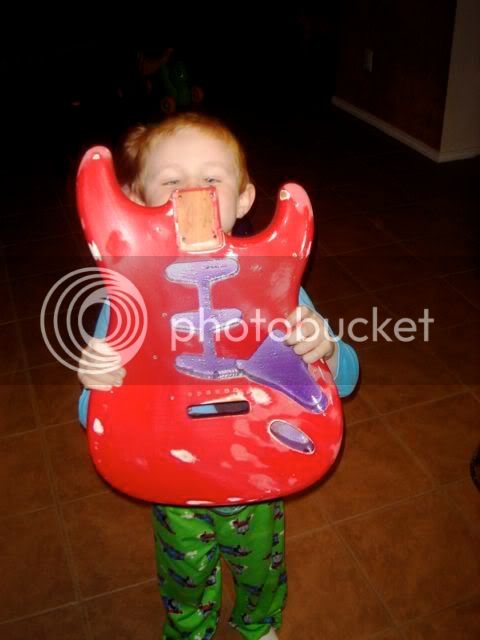 Sanded with 320 to clean up the 60 grit scratches 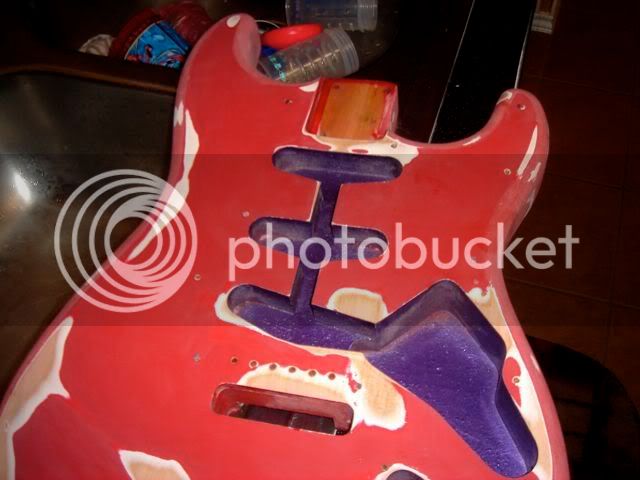 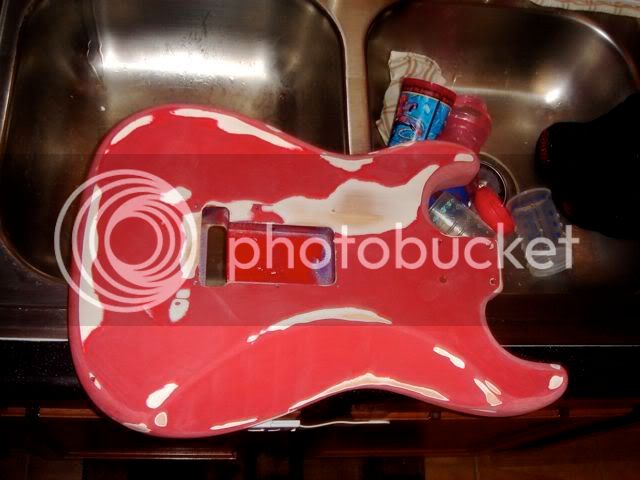 I was pretty happy with the wireing on this 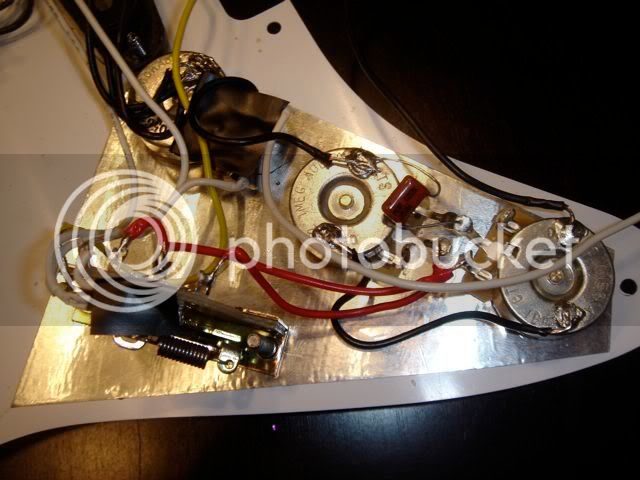 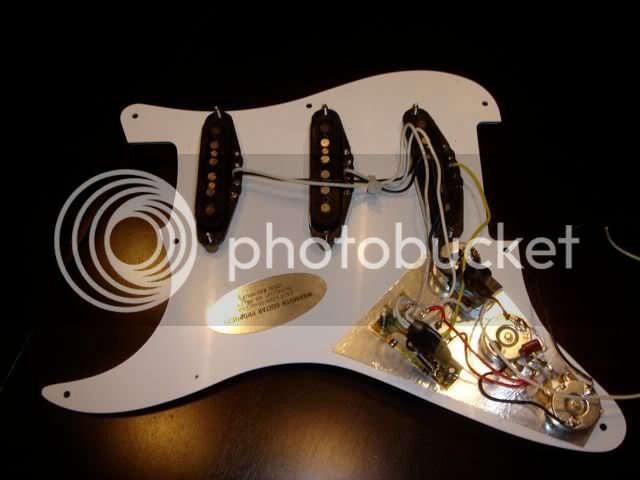 Really like the pick guard.  The aged covers dont look right, but I was able to replace them with white before the final build. 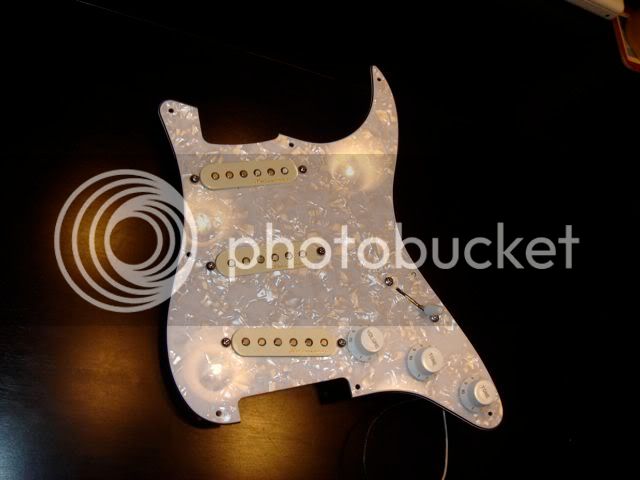 Here is the body after finishing.  I love the color 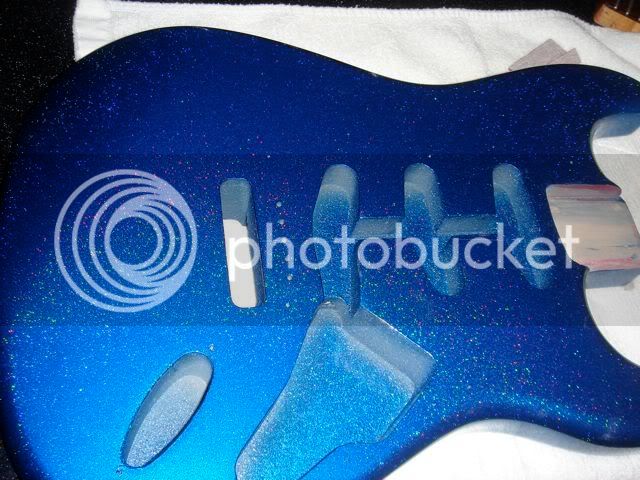 And here it is after reassembly 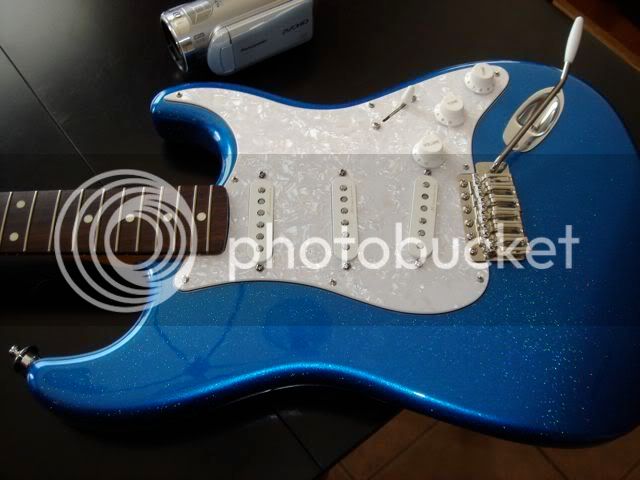 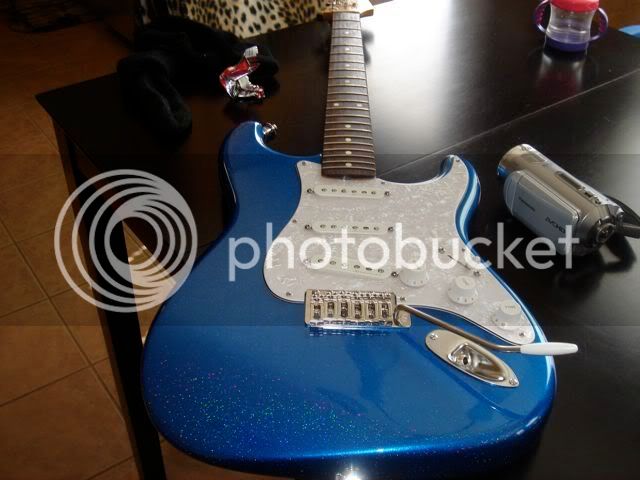 This shot really catches the multi-color pearl in the mid coat. 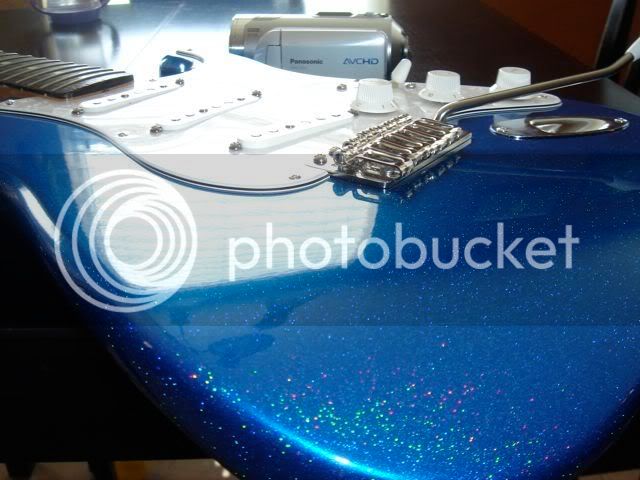 Looks awesome - a strat I'd love to have, though I do like purple a lot too.
M

That sir, is a dead freakin sexy strat.

GoDrex said:
Looks awesome - a strat I'd love to have, though I do like purple a lot too.
Click to expand...

My guitar is gonna be dyed purple  :headbang:
T

Really cool!  Wow you totally outdid me on that one! How do you like the new pups and trem?
W

[like the kid in the Dodge commercials] SWEET!  :headbang:
C

That is one wooohooo nice Strat, but ....


... I think I'd like one the color of the jammie-bottoms in the 4th picture <g>

A Thomas the Train Strat - my son would love one of those. :laughing11:
C

BTW, where was the crack in the body?
C

Thanks for the comments guys, I'm really pleased with the way things turned out.

tfarny,
I'm liking the VSVG so far.  I was able to set it up as a down only, so its not screwing with my tuning.  I'm not usually a trem sorta guy, but I wanted this one to be as "Strat" as it could be.  I love the sound of the Vintage Noiseless.  They are not Shredder pups by any means, but they have a good quack and a great clean tone.  Under the wall-o-distortion that is my Danelectro Fab Tone, they still manage to have great character.  Unfortunately, the neck pickup is DOA.  I tested it when they came in and it worked, but some time between then and now, the hair thing wire coming off the bobbin on the top coil broke away from the solder point.  I don't have the equipment or experience to know how to fix it, so I will probably be ordering a replacement off of eBay next week.

CB,
The crack is very thin, and runs up the body on a line with that runs through just about where the low E side of the trem plate is.  it is visible at the right angle.  My dad's eyesight is not what it used to be, so I dont think he got it filled perfectly.  That or something shifted during assembly.

It dosn't seem to have affected the playability of the body, and everything went in without a hiccup.  I will keep an eye on it for sure though.
C

That might just be the wood lamination not a crack?  Its like the skunk stripe on my one goncalo neck... its raised a bit I've noticed.  It was when I got it, then I leveled it, and its raised again, but I cant see how the relief is effected, so I'm guessing its weather - its been damp then dry then damp... yay Florida.  Like I said in the other post - most of the cracks I've seen ran along the edges, not down the top or back.
C

It just seemed odd the way it showed up, but then again, being stripped with some bare wood showing, hanging in an out door shop while being preped and paintined, I suppose the lamination joint may have swelled a bit or some such.  At any rate, it seems to be fine now.

Hell, I'm so happy with they way everything came out (accept for the f***ing neck pickup) I've forgotten the crack   Crack?  What crack?

Its like having a new guitar, accept that its even better because I did more than just slap a credit card down at the good ol' Guitar Center  :hello2: :hello2:
C

chuck7 said:
its even better because I did more than just slap a credit card down
Click to expand...

And that, my brother, is point of the whole endeavor!~
T

Hey chuck I'm sure someone here could advise you about fixing that neck pickup. It's probably not that hard for you considering the great job you already did.
J

Great job on the refinish...looks awesome!  I like my VSVG bridge alot too.  It's very stable and doesn't go out of tune.

about the pup, if it is off the top coil you may be able to take one wind off the pup without much trouble. unless it is being replaced under warenty and you send it in there is no harm in trying to fix it.

it may take some heat to loosen any wax or the coating on the wire so you can unwind safely. i wouldn't use a heat gun though, too hot. maybe a hair dryer, on a lower setting. once you have a coil unwrapped carefully scrape off any vanish at the pion it will get soldered in the hole. you'll have to de-solder what's in the hole, radio shack sells de-soldering irons or you can use a copper wic to draw it out while you have heat on it. if you get all that done successfully just thread the wire through the eyelet, maybe wrap it around a time or too for extra security, connect your pickup lead and fill the hole with solder.
C

good news, I was able to fix the pickup.  I don't know that I did it the "right" way, but it works.  I took a small scrap of wire and tined both ends.  Then I carefully joined one end to the hair thin wire coming from the pickup - that was the hardest part.  Then I simply connected the other end to the eyelet - it worked!

This has been a good weekend... maybe I should buy some lotto tickets or something
D

that works, as long as everything is secure and wont beak again.
the vintage noiseless really do sound good don't they.
You must log in or register to reply here.