Guess who got a new toy today!

I finished my work for Don Lace last week, so today I got to go down to the factory and chose my goodies.  Here's what I walked out with: 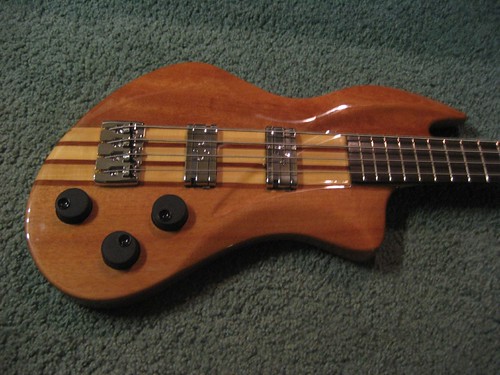 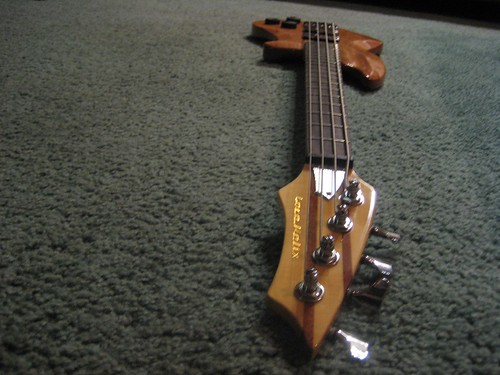 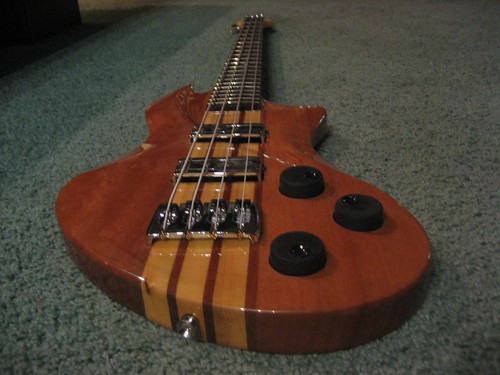 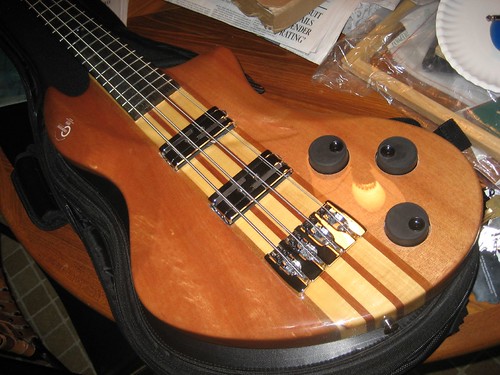 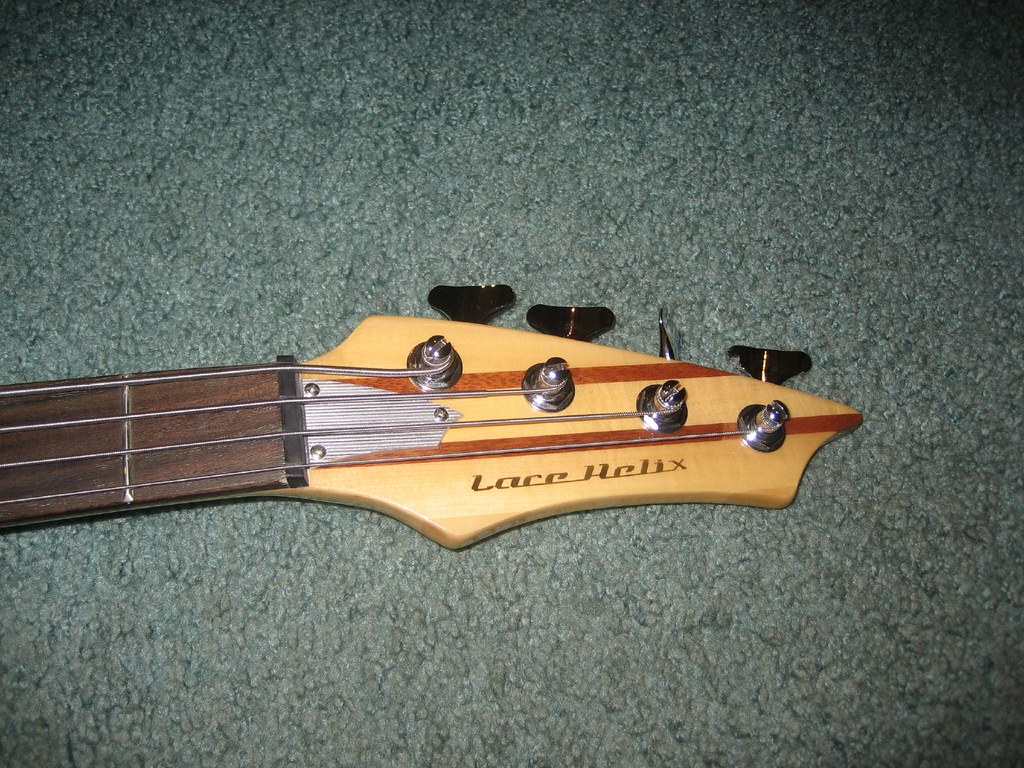 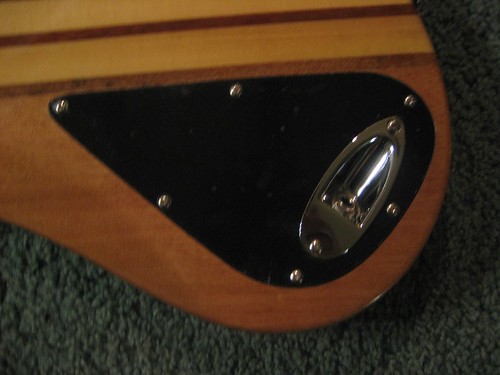 Alumitones: the pickups from outer space. 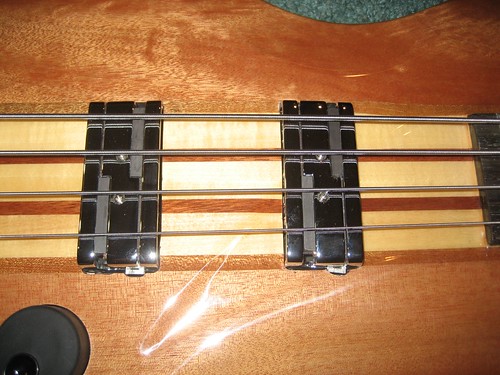 The contours on this are a little insane.  The only flat spot on it is the thru neck part.  It kind of reminds me of a Corvette Sting Ray. 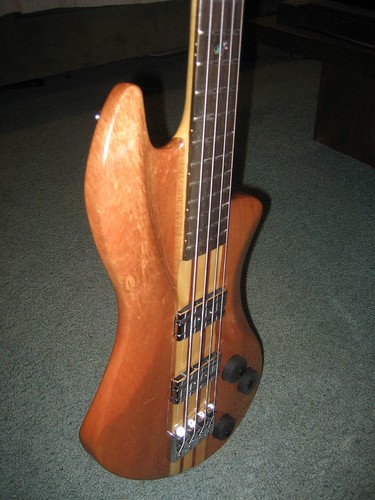 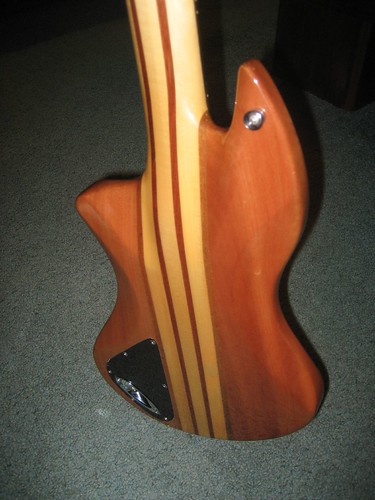 Don pretty much let me loose in the showroom and the factory to pick anything I wanted.  I have been wanting a bass for a long time, so I went with that.  I also played an archtop (I had no idea that they even made archtops) that sounded real nice and this weird Cybercaster with a twisted neck.  It looked a little odd, but it was incredibly comfortable to play.  I also tried out their regular shaped neck Cybercaster, and that thing was pretty cool too, and nice looking with a matte finish rosewood top.

They had the Helix in dark trans blue, red, and black.  I was thinking of getting the blue, but my LP is going to be blue, and I already have red and black guitars, so I thought I'd be different and go with the natural.  Plus they are out of stock in the blue at the moment so I would have had to wait a while.

I also got some chrome Alumitone humbuckers to try in my LP.  That should be interesting.

Don said that he and his fiance are thinking up more work for me, so I might be getting some more toys from them in the future.  If I ever build a Strat I think I'll get a set of Sensor Golds for it.

Anywho, I'm really excited because this is my first bass and it's really cool.  The pickups are super clear and I was able to get a lot of variation in the tone with it.  It sustains for a lonnnnng time too.  It's also pretty light weight, which kind of surprised me.

I took it to GC and Rockit Music and tried out some amps.  I still need to save up for an amp though, so I just got a little Amplug type of thing so that I can plug in my headphones and practice while I save up and shop around for an amp.  I have to say, it was pretty cool walking into GC with it and having half the store stop what they were doing to come and look at it because it is so different looking.  One guy asked if he could try it and he was obviously an experienced bassist.  He asked me if Don needed more work done.
N

Whoa. Well done... I want to do some favors too!
S

What kind of work did you do for him, if you don't mind me asking?
H

I painted part of his house.  They might call me up later to get some custom artwork done too, so I might be able to get some more stuff down the line.
P

Yowsers.  I guess unique is an understatement.  Itsa beauty.  I just am having a hard time getting used to the knobs on it.  Well, don't let my hang up interfere with you having a good time with it.
Patrick

That's a pretty cool bass there!

I wonder if alumitones sound better on basses than guitars...

Patrick from Davis said:
Yowsers.  I guess unique is an understatement.  Itsa beauty.  I just am having a hard time getting used to the knobs on it.  Well, don't let my hang up interfere with you having a good time with it.
Patrick
Click to expand...

I understand where you're coming from.  The knobs are my least favorite thing about it, especially because they are countersunk (well, not quite countersunk because they aren't flush, but you know what I'm saying) into the body so I would never be able to change them even if I wanted to.  Plus I think they are a little larger than they really need to be.  They are also matte black, so they get fingerprints which are hard to wipe off.
E

I wonder if alumitones sound better on basses than guitars...
Click to expand...

It seems like they would be. If people describe them as sort of 'blank' or 'neutral' then that's what many bass players are after, right?


And to the OP - That is pretty darn sweet. I didn't know Lace even made guitars.

I'd seen a photograph of one of these before, but just a smallish frontal view. It's funny really... if you look at the details individually you start to question them - a few have been mentioned already. The knobs of course, the jack on the back. I thought the choice of 4-in-line tuners a bit odd, with this general layout you'd expect 2+2. The placement of the upper strap button is also a bit curious. But when you step back and look at the whole, it really works. Very nice.

Do you think you could post a pic of the 12th fret inlay? It doesn't show very well on these pics, and I've got something of a 12th fret inlay fetish.
E

I actually really like the idea of a jack in the back of the guitar. I might destroy my back plate to wire my upcoming rear-routed JM that way. You could just wrap it right around the strap and it would never be in the way again.
H

Yeah, when I was playing their stuff in the showroom, everything I picked up had at least one thing that made me say "Hmmm.  That's different."  They are definitely not a conservative brand when it comes to design.  I thought the jack in the back would be annoying for my little Amplug type thing, but it actually doesn't get in the way at all because the bass rests far enough out from my body that it doesn't get bumped, as long as I don't jump around or anything.

Here is the 12th fret inlay: 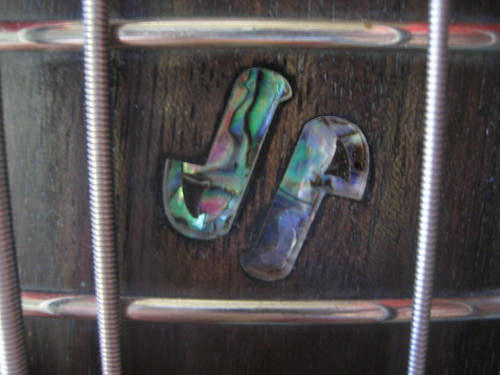 If anyone is curious as to how it sounds, here are some vids I found on YouTube.  The first one is a different model with only one pickup.  The second is basically exactly what I have, but, unfortunately the guy in it is kind of annoying.

I really like those! For some reason, bass players and manufacturers are much more open to new shapes, different electronic ideas and such than guitarists - I guess when you're standing at the back of the stage thumping away on the root, you have more time to develop and harbor your seething resentments & funny idears.... :dontknow: I am a radical, trendy cutting-edgey kind of guy yet for some reason these Telecasters attach themselves to me like wood ticks and won't go away... :toothy12: That somehow kinda reminds of the melting Andreas guitars, one of my lust objects about which my lust is fortunately diffuse enough to ignore:

The shape looks quite comfortable.
S

wow that thing is beautiful
R

not quite my thing, as far as shapes go, but not a bad deal for a bit of painting... call me up if you need some help on his next home project  :laughing7:
M

I can clean windows and change lightbulbs!
B

Wow, looks like you made out MUCH better than just a set of pickups.

A 4-string bass with a unique look and tone.

All the bass guitars in the Helix line feature an incredibly eye-catching body design, with plenty of curves not seen on your average guitar. The assymetrical body shape and headstock include an aerodynamic-like, sharktooth-shaped groove where the fretboard meets the guitar. This premium model has laminated 6-piece neck with through-body construction, a mahogany body, and a 3-way selector switch. The dual Alumitone pickups are Jeff Lace original design, and are current driven versus the more traditional voltage-based pickups, providing a broad-band response for tighter top-end, more mid-range, and a huge bottom end. They're also more environmentally friendly (no more battery discarding) and make the guitar about 2 pounds lighter than it would be with the alternative. The Helix bass is also 34" scale length with heavy-duty chrome bridge and sealed chrome tuners, a twisted "H" inlay on the fretboard, and comes with a Red Label Design gig bag.

I let a whole bunch of people try it out, and the general consensus is that it is very comfortable to play.  I don't have a proper amp yet though, so it's kind of hard to judge the sound, but so far no issues with the electronics running it through the little Pocket Rockit headphone amp.

I have been practicing with it, trying to learn to play bass with the whole two finger picking thing and the thumb muting.  It is fun, but whenever I pick up my guitar now I'm like "This is sooo much easier!"  I guess it's whatever you're used to.
You must log in or register to reply here.