After about 3 month of an enduring process, my guitar is at last gig worthy.
Bottom line first - it's great, very unique, which is what I care about most, and it's utterly comfortable.
Is it perfect, NO!, and I'll explain this in details - for the ones that are interested.

So here it goes:

So the story goes:
Got it, assembled it (I'm quite rubbish at it, but I had loooots of fun
Neck was not playing right, lots of buzz, no relief at all

Knowing my limitation (I hope I'm a better player than a luthier) I gave it to a local shop to setup
They had to "stone grind" on some areas (I hope I'm getting the terminology right)
First time playing it after the setup was - wow, great but - on various places on the neck it had very dead sound. mainly along the areas of 7 -10 fret on the top string, and B string, and some around the 12th
The guitar was basically very musical, but resulted in these areas to not have the same sustain and feel as the rest of the guitar.

I decided to get more advice, and was advise to try Chandler's in the UK, which are considered the best here.
They have inspected the neck and advised me the following:

Around the 7-10th fret there is a knot in the fingerboard (looks like a "bird's eye" see picture), which causes the neck to be "un-evenly" warped, which is why it behaves this way
They have applied more "stoned" thingie, and the neck started for the first time to feel right
They have applied a "computerised" process originally, but advised me that if I want, they will also do a "human" touch to get rid of the rest of the dead spots

I wrote to "Warmoth" and got the following reply:

The symptoms you describe are text book fret work problems in which there are “areas” of issue.  From the perspective of building more necks than practically anyone, a knot on the fingerboard is not a credible explanation. Our advice would be to simply get a qualified second opinion; it’s usually free and fast and you’re likely to get new information. Unless we could find a manufacturer’s defect, there wouldn’t be a warranty issue here.

I wasn't that happy with the reply. I was expecting more support then to simply discredit the person in the shop, which is considered to be the best by people like Jimmy Page...

However, I decided it's time to play it live, and for the past 2 month I'm playing it as my main axe.

Here's the funny thing - originally I was somewhat disappointed. The guitar has all the right potential, but the un-eveness of the tone and sustain caused it to be somewhat un-musical.

However after a couple of months of playing it, it seems to have sorted itself, NOT PERFECT, but much more even across the neck. I'm getting loads of positive reaction to both the sound and the look.

The sound is VERY unique, not really a strat, but rather a combination of sounds. It's got a monster Humbucker tone, which I never expected, and some fantastic "Bell Like" ring to it.

Am I happy - well about 90%, but if the trend will continue, I'll get to 100%. I'm actually not that picky about my guitars, I tend to sound the same on all my guitars. This guitar has a great combination of weight, ring, sustain, versatility and the trem stays in tune like no other trem I've used before.

Thanks for all who participate in this forum, I was a passive participant, so if you have any questions, please let me know, I feel it's my turn to pay back

And some additional photos
Including the "knot"

Congratulations with your guitar! It's beautifull!

About the "birdseye"...
Well, you could make a conference with ALL the great luthiers in the world, ONLY about it... And I can tell you, would have a very nervous talk, some fights, but would not have ANY  agreement between thenselves about it... It's very hard to say it IS the knot, because if it IS, a birdseye maple would sound beyond cr@p, don't you agree? For the other side, must have a reason to the guitar sound like that... I really can't understand why it would happens, so I won't guess... But I'm not that sure too about the knot change the sound...  :dontknow:

As I see you're enjoing the guitar, I say: this is the really matter!
Congrats!
G

Looks great!  Just out of curiosity, did you ever get a second opinion?
V

I agree about your opinion of Charlie Chandler. He is very well known AND respected by tons of pro players. He's looked after so many famous people's guitars it's not even funny . I've had a few guitars and things done by him and his work is really top notch. A bit expensive but well worth it.
A

No I didn't get a second opinion
I got tired waiting, just wanted to play the guitar.
I'm quite a disorganised person, so getting it to another place, waiting to have it done, etc was all a chore, and I tend to be too busy between work/kids javascript:void(0);

re: the luthiers gathering, probably so, as much as 100 guitarists won't agree on what's the "best lick of all time" (They will just agree that it needs to be played faster
I guess time will tell how it will fair, if the neck won't deteriorate, it will be a great working guitar.

Thanks for all your comments
T

Very cool guitar(even with the knot), guess I'm not the only one who's a green freak.

taez555 said:
Very cool guitar(even with the knot), guess I'm not the only one who's a green freak.

Dead right erik, I've been a green freak since before tobacco burst.:glasses9:​ 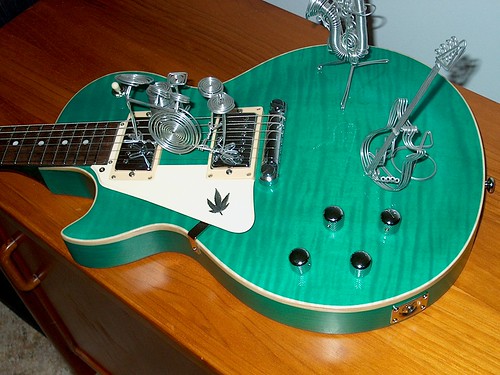 I love green - I plan to order a green explorer - well I'm thinking transparent green on swamp ash. I think it will look sweet.

The thing that concerns me is, yours is the 3rd neck yet that I've read about that has no relief.  Mine's that way, and someone else mentioned the same problem on my threat about my Strat.

I called Warmoth and talked to Rob (He was very helpful) and he suggested loosening the truss rod all the way, then tune the guitar 1/2 step higher and leave it for a week or so.  Or, go up a gauge in strings, which is what I did.  We'll see what happens with it.  I only hope this "no relief" thing isn't the start of a trend...
S

A Mean Machine. Definantly covered all the bases with this one. :blob7:
You must log in or register to reply here.

Is sanding a raw neck required?
2

What to Do Next