Going Off The Rails On A Pedal Train...

First and foremost I'd like to apologize for the title of this thread. It's really awful, I knew it and I did it anyway. Inexcusable, really.

Moving on... I've been entertaining the idea of building a new pedal board from the ground up to host my Helix and a few outboard devices, but it occurred to me that I can hardly get through my project list as it is. I switched gears, took some measurements and concluded that the Pedal Train Terra was the one for me at 42" x 14-1/2". This was the original mockup, verifying it had the real estate to do what I wanted (The wah wouldn't stay put because I had removed its rubber feet..). A promising start!

The Helix has a few rubber feet on the bottom that would interfere with securing it to the board: 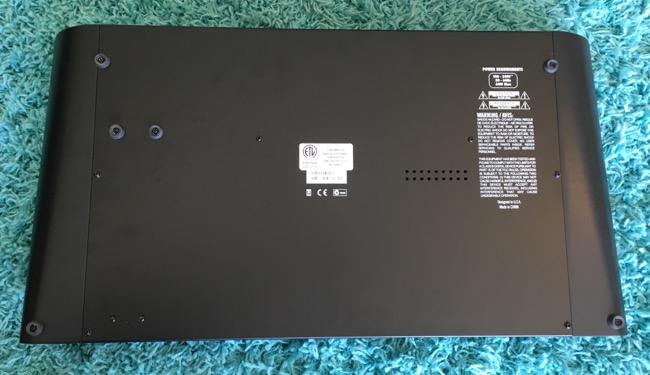 I didn't particularly want to start taking the Helix apart, you never know when a screw is doing something structural on the inside, so instead I drilled holes in the surface of the board for the rubber feet to recess into, allowing Helix's chassis to sit directly on the board. 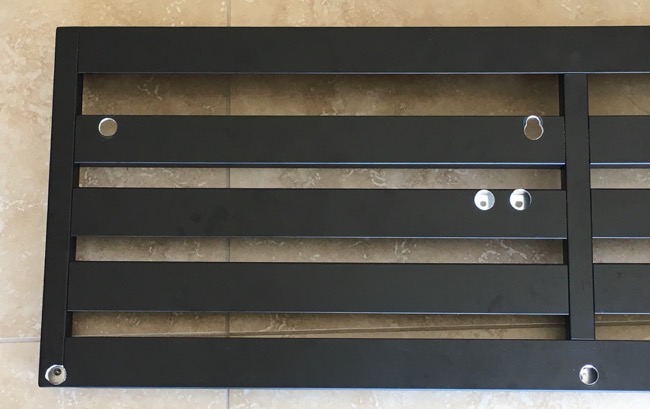 It was tricky getting the holes located and a couple had to be worked over a bit, but it's all hidden and it worked as intended. Helix nestled right in, with plenty of room for cable clearances behind. 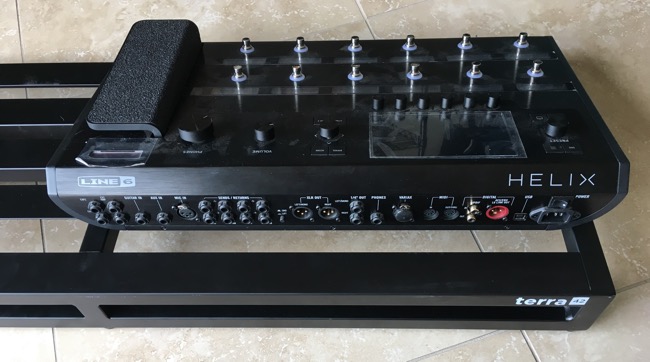 For juice, I turned to my old VooDoo Labs PedalPower 2+. In addition to powering the outboard pedals, it will also power Helix through the courtesy outlet. Which means only one power cord for the board. Pedal Train sells a very slick bracket for mounting these power supplies to the board, worked a treat. 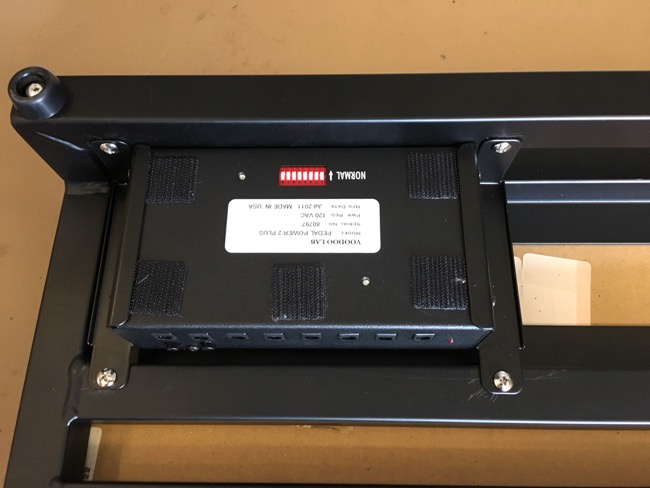 Instead of the velcro supplied by Pedal Train, I followed a friends advice and used 3M Dual Lock "re-closable fastener" (fancy term for super velcro...). It ain't cheap, but man it's good stuff. Very distinct positive engagement when you attach them and they will not let go. I used 2" on the board and 1" on the pedals. The white in this picture is the backing of the 1", which will be removed just prior to mushing the Helix onto it. 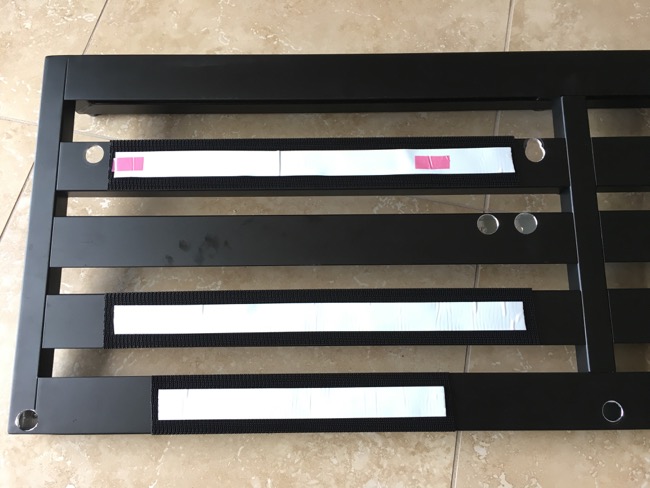 A few changes to the layout, but it's all good.

Wiring this board was a beast. I got most of it hooked up with standard issue patch cables of varying lengths, but I had to round up a Geroge L's kit to make some of the real long runs. There are still a couple of places where I'd like a longer cable to allow for cleaner wiring, but it's hard to justify another kit just to make it prettier. I did let my inner OCD out and got zip tie anchors to allow for routing things as cleanly as possible. Turned out pretty alright I do believe.

One of the biggest challenges was getting all of the plugs to physically fit in all of the jacks on the back of Helix, close quarters! 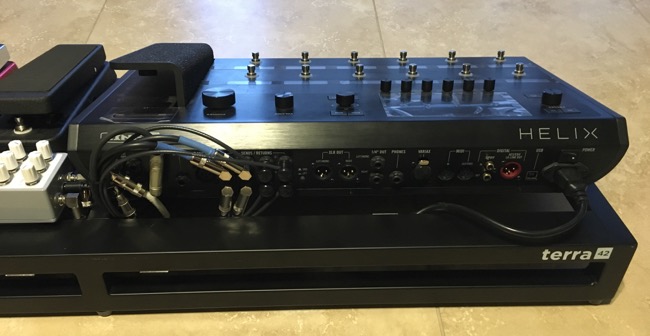 Nice to see. I know what you mean about too many projects.

It would be good if manufacturers provided information on methods of mounting their equipment, so you would know for sure what's behind a screw or whether it is intended for the purpose.

I have read somewhere of others removing the screws of the helix and then mounting using appropriately longer screws, I think M4 type.  Caveat emptor on this comment as it is off the top of my head.
T

How do you like the Shoegazer? I've been thinking about picking one up for a while now but the option of the Rocket (which is the same first half but with a different second stage) has given me pause.

stratamania said:
Nice to see. I know what you mean about too many projects.

It would be good if manufacturers provided information on methods of mounting their equipment, so you would know for sure what's behind a screw or whether it is intended for the purpose.

I have read somewhere of others removing the screws of the helix and then mounting using appropriately longer screws, I think M4 type.  Caveat emptor on this comment as it is off the top of my head.
Click to expand...

Yeah, my ambitions are bigger than my calendar, haha! Between family life, a job that requires way too much time out of town and the demands of home ownership (the pool turned green last time I was out of town, noooooooo!) I stay pretty hooked up. I am convinced that there is less time in a day than there used to be.

A hard mount on a big unit like Helix or similar would be the ultimate, interesting. As you say, it would be good to have info available from the manufacturers on what options you have. Even if it was just stamped into the chassis, "Do not remove this screw".

How do you like the Shoegazer? I've been thinking about picking one up for a while now but the option of the Rocket (which is the same first half but with a different second stage) has given me pause.
Click to expand...

Thanks! I love the Shoegazer, it's one of my favorite things, just a wonderful end-of-the-world fuzz. With some delay and reverb it will bring down the walls of Jericho. As a side note, it is the noisiest pedal I have ever encountered. All of the noise comes from the Torn's Peaker side, but with both together the hiss at idle is almost as loud as the signal when playing. I run it in the loop of a Boss NS-2 Noise Supressor and it's a perfect pairing. Just something to be aware of while you're pondering. I made this audio clip a while back for a friend of mine, demonstrating the noise level and the NS-2. The first bit demonstrates the bypassed tone (clean amp with reverb and delay), then enters the Shoegazer (can you hear the hiss?), then I engage the NS-2.

I haven't played the Rocket myself, but it strikes me that they are different enough that you should probably have both  ccasion14:
T

Oh wow that is noisy! But it sounds great too. Hm, decisions, decisions...

I prostrate myself before your clever titling and amazing work!  A man after my own heart.

Thanks Frank, you make me feel a little less terrible about the thread title, haha!  Sadly, just a couple of days after this my Helix suffered a component failure and had to be sent off for repairs. So now it's in California and I'm in Alaska and hopefully I'll get to hook back up with it in Arizona in another week and a half or so....

On a side note, after having to remove the Helix from the board I can vouch for the strength of that 3M super velcro, jimminy frissmiss! My great granny would have described it as "stuck like a hair in a biscuit". I was only half convinced I'd get it off of there without destroying it in the process.

As I stated above, I suffered a component failure on the Helix shortly after getting this board together. I bought it at Guitar center and got their 24-month "Pro Coverage". The failure occurred 15 months after purchase, so it was outside of the manufacturers warranty. I activated the Guitar Center coverage and they had me send it off to a repair facility. The facility deemed that the unit was irreparable (which more than likely means repair was impractical as opposed to impossible...) and I was issued a gift card for the full purchase price. I placed the order online and the new Helix is on the way. It'll be at my house before I get home from my work travels. This sort of service is consistent with my experiences at Guitar Center. I see so much criticism and hate directed toward Guitar Center on various forums and I've never understood it. They've always gone above and beyond for me. Props to Guitar Center!

I may have tossed an Earthquaker Devices Erupter fuzz on the order for good measure....
You must log in or register to reply here.

Opinion Sought: How important is stereo output on a Chorus pedal?

Start of a pedal board