I have an idea to try and create a dual coil version of my beloved Modulus Graphite Blackknife (had it 23 years and the love affair is still going strong). I have searched Warmoth for two days and not found a strat body in H-X-H rear routing though have seen posts here about them and noted four examples in the Strat Customer Gallery. Is that configuration special order only? My plan is to mate up a Moses SK-27 neck, Active EMGs and hopefully something similar in appearance to the 80s Kahler (which is what my Modulus has).

The second question concerns body laminate. Any guesses as to what I'd order to achieve an appearance similar to this picture. The photo is not too good (seems I hold a camera about as well as I play guitar), but the laminate has a beautiful deep scalloped look. I had always thought it was maple but it doesn't match what is showing on Warmoth's laminate pages. Any guesses on what type of laminate this is? 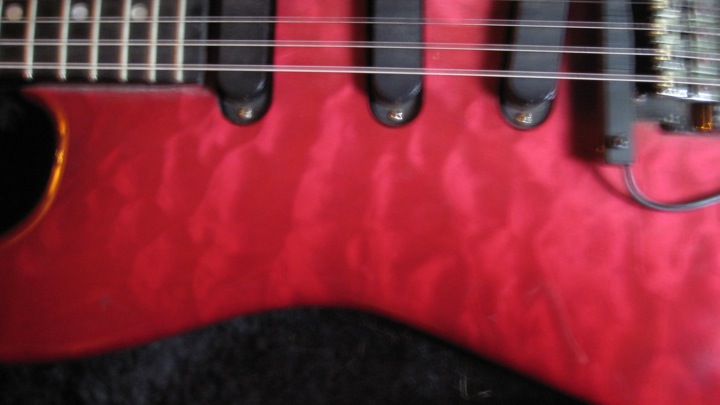 Thanks in advance for any ideas.
D

That's a quilt maple top.  You can get the pickup/bridge routes you want added to any unrouted showcase body for free.

Right under my nose for two days! The un-routed must be the X-X-X listings then. I'm slow I think.

I just went back and looked at the Quilted Maple. I see the resemblance but the scallops are so much smaller, i didn't put the two together.

Thanks for the info. Now on to figuring out all the hardware.

Pretty much as long as there isnt a rout already there, they can put one if for you. So even things with humbuckers in the bridge, you can just get another one put in the neck.
E

So the X-X-H and X-X-X are fair game to become an H-X-H. I've been searching and this info has narrowed it down and I'm finding all kinds of possibilities. I appreciate the information.
R

No problem, thats what this forum is for :icon_thumright:
M

Once you dye or coat a wood (Or get Warmoth to do it), the figuring pops more
E

Thanks Max, I was looking at the finished bodies (though there are none with the right configuration) to determine the appropriate color. The red translucent appeared to be the closest. I've only painted cars and fences so this should be an experience (well, I've done some furniture too ;-)). The s2943 appears to have as large a swirls though requires a TOM bridge. I could sacrifice the Tremelo for that appearance. Price is very good also. The only question will be if the curve of the Moses neck will be compatible. I was just about to send a message off to them to find out.
A

I do believe you can pick ANY body from the showcase and get it routed anyway you like, as far as pickups go, even a 3 singles routed body can be routed for humbuckers, just order the correct pickguard to finnish it off
E

That's good to know but I just got off the phone with Warmoth and purchased the body. I decided to have them do the finish since this is my first build and I might as well make it easy. Mounting the neck and probable fret work will be plenty of learning for me. Four weeks and it will be here bridge and all, Quilt Maple/Alder in Translucent Red. I'm ordering the neck today too. It's 16 inch radius with 6150 Jumbos.

I hate to ask this because it's like "which car should I buy". Any opinions on the pickups. I'm going to have to order them soon. I was going with EMGs just because that is what most of the Modulus' came with during the period mine was made (the strat style headstock). I have a change in plans because I just received an ESP Eclipse II with 60/81 combo and that probably will suffice for my grunge sound in my recording. The original plan of using 81/85 in this build is probably unnecessary. I say "probably" because I'm so excited about the Warmoth/Moses that I haven't even tuned it up and plugged it in yet ;-). UPS drove up while I was on the phone with Warmoth (side note, I bet many here feel the same way, building something makes COTS guitars seem boring, even brand new). Anyway, on the pickups, the Modulus clone will be a much brighter guitar (too bright for most tastes) just because of the neck (based on my experience, with single coils, it's painfully bright). Is there a good set of Humbuckers I can get in black that would leverage the brightness of this set up other than EMGs. I found some information that Modulus used Seymour Duncans in the early to mid 90s so it's not a stretch to use them in a fake Modulus. Covers may be a problem as I was hoping to have all black hardware and all I see are chrome. exposed or gold.  Remember it's very likely going to be too bright to start with so depth is more important than clarity (I think).

Just so you get an idea, here is a photo of the general config I'm trying to emulate only in dual humbuckers. Ignore the GK-1 unit, I removed it last night and thankfully, 20 some years of sticky tape didn't hurt the finish at all. The color looks orangy in this photo but that is just the light, the guitar is a deep red. I think Warmoth's translucent red will match closely. Any ideas on better pickups would be appreciated. That's all I need to figure out now. The clone doesn't need to be identical, it's just a novelty to make it a close match. I can imagine if I ever gig again, having both on stage would be a kick. 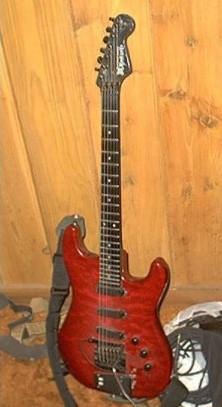 I haven't even got anything yet and now I'm imagining building a 12 string. ;-)

Thanks for everyone's help. It really sped up the process.
B

Quilt maple top with red dye finish.
You must log in or register to reply here.

I completed my first build!

Can anyone help me figure out what neck profile this is? With pics included!

Carve my own Strat body?