I've been looking to get back into building my own effects pedals recently (I last tried two years ago and found that I'm useless with veroboard), I thought it best to start with a simple kit to get back into the process. So to that end I bought two kits from Build Your Own Clone, the Armstrong Twin and Lazy Sprocket, since the AT is the simplest I started with that. I've spent quite a few hours in the last couple of days hunched over a PCB and small enclosure building it, and oddly for it it worked perfectly straight away, probably thanks to the quality of the BYOC PCBs and instructions than my own abilities I suspect.

The Armstrong Twin is a combination of the rather well known Dan Armstrong Green Ringer and Orange Squeezer, all in one little unit, the controls are simple enough, the toggle switch sets the attack of the compressor (slow, medium or fast), the pot (left) is a volume control and the rotary switch (right) selects between compressor only, octave only or both. I still need to adjust the internal trimpot to get the compressor right but first impressions are good.

Unlike Death by Uberschall's BYOC phaser this has not got a flashy finish as I simply can't be bothered, I won't spend much time looking at it anyway. So I've simply put a couple of coats of clear Lacquer on the bare metal to protect it a little. 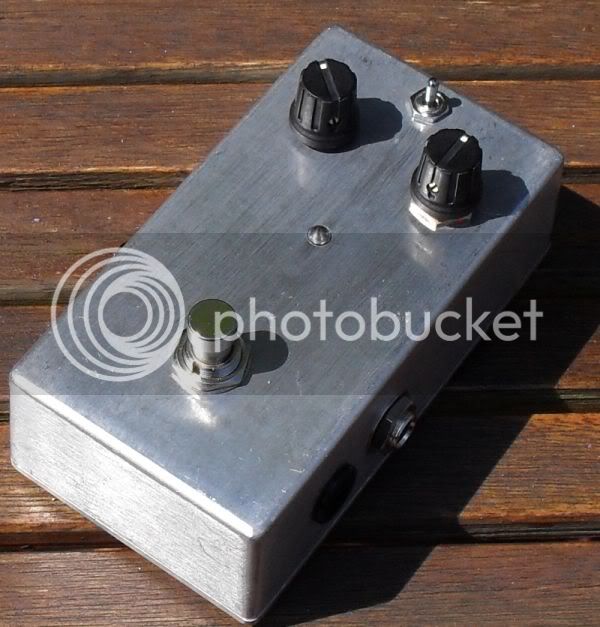 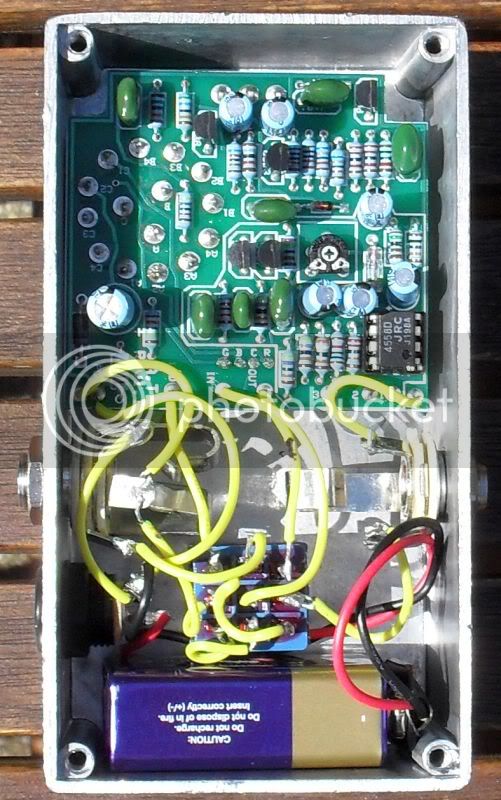 I'm looking forward to starting on the next kit, I just need to wait for the violet LED (red is dull) and butane refill can that I've ordered before I can start.

As ever I may record a clip at some point I can't promise anything though.

I have BYOC website on my desktop, and for a guy who's never bought from them I visit there a lot, I so wanna build a few of his kits, they are supposedly clones(as the name implies) of some good pedal but with a true bypass and in many case, better quality parts than the originals.

I'd like to build several of those pedals into one encloseure, A bench level or rack height encloser, and use a remote floor button board to turn on off the individual effects.
P

I have the Analog Chorus, the Stereo Analog Flanger, the Ping pong delay, the Fuzz face (ESV Fuzz) the Large Beaver, and the Overdrive Two.  Fun stuff, and really fun to mod or play around with.  I want to get the Analog delay, Large Sprocket, Tri Boost, and the Tremolo for kicks.  I tink for starting or building the delay pedals they make a great product.  Well they make a great product, just fuzz pedals are not that hard to build on your own.

I have an Armstrong twin, distortion 250+, and Large Beaver (Ram's head). All great! Though admittedly the 250+ is probably my least favorite pedal on my board, but that has more to do with me than the pedal (or BYOC) - I'm primarily using the Ram's Head and a BK Butler Tube Driver for my crunch right now.

BYOC rocks, plain and simple. You don't have to be a rocket scientist to build their kits.They are well laid out and the instruction are very clear and easy to follow. But if you have any issues, their forum is top notch.  :icon_thumright:

Love my phaser. Blows the MXR units out the window.
N

Death by Uberschall said:
their forum is top notch.  :icon_thumright:
Click to expand...

I know, I've been given all sorts of useful advice there, and found some nice new pedals to build, so far the list is: WEM Fuzz, one knob Fuzz Face clone, a weird 8 bit chip tune style pedal and a couple of valve distortions. :icon_biggrin:
N

Just a quick update to say that I've finally got round to adding some basic labelling to both the Armstrong Twin and Lazy Sprocket, I did just use a basic label maker but it doesn't look quite as bad as the photos suggest, my camera is very good at focusing on stuff I'd ideally like to hide. 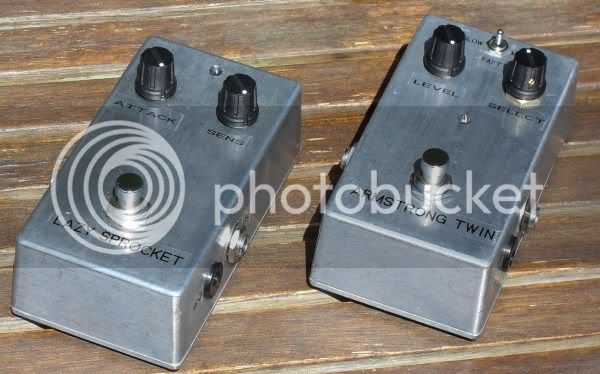 Doing The Neck, Not My Preferred Way