So this Christmas my girlfriend tells me she wants a bass.
She was looking around at some stuff on e-bay, cheesy stuff.

Seeing yet another opportunity to spend money at Warmoth, I picked up one of these off of the showcase: 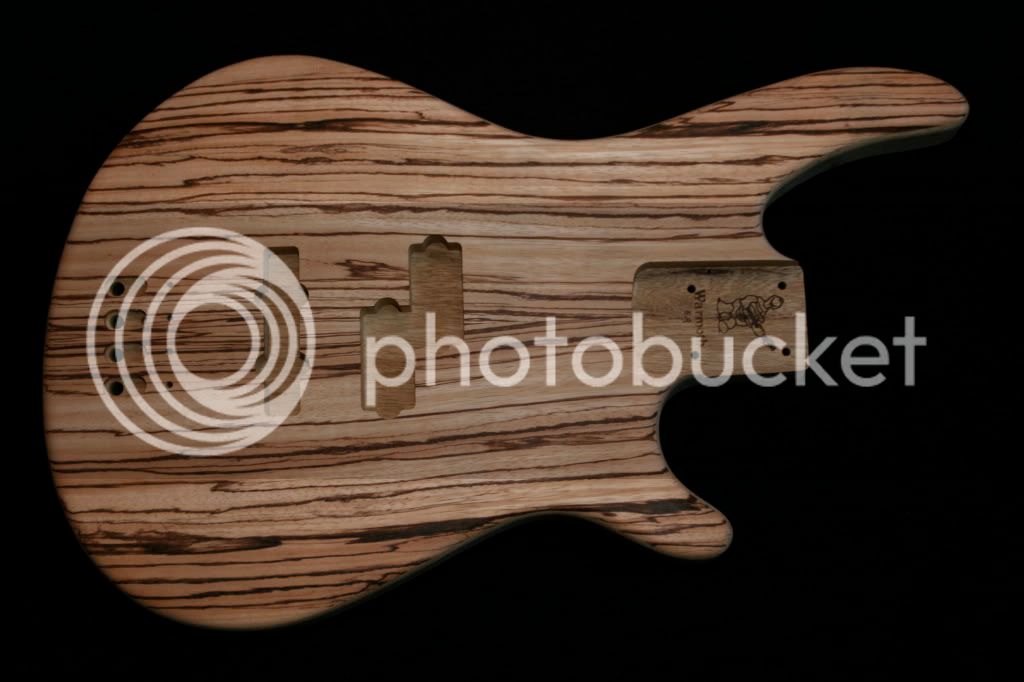 She said she wanted something red.  I used a MEK based dye this time around based on another boardmembers suggestion.
I had the whole thing sprayed in a blood red, but it seemed to be missing something.
I thought I would try a sunburst, since its a lam top body.  Also, there were some imperfections on the sides/edges that really didn't look all that hot.
So here are the results:
Front 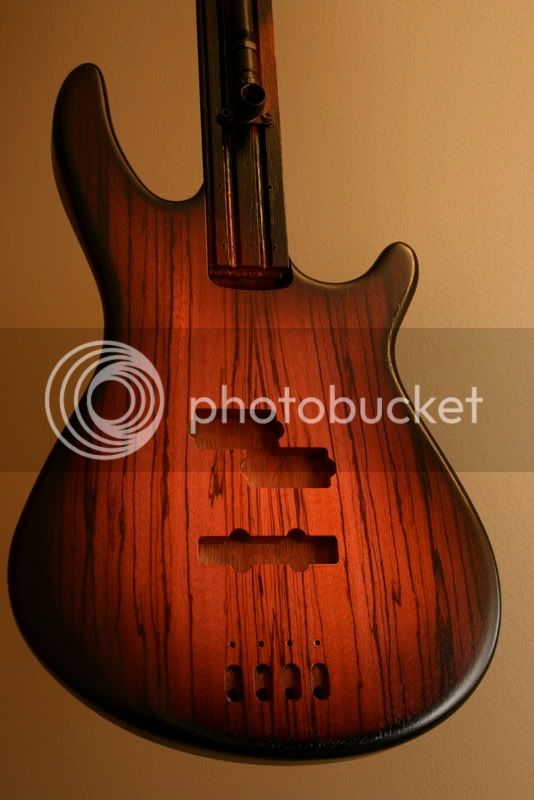 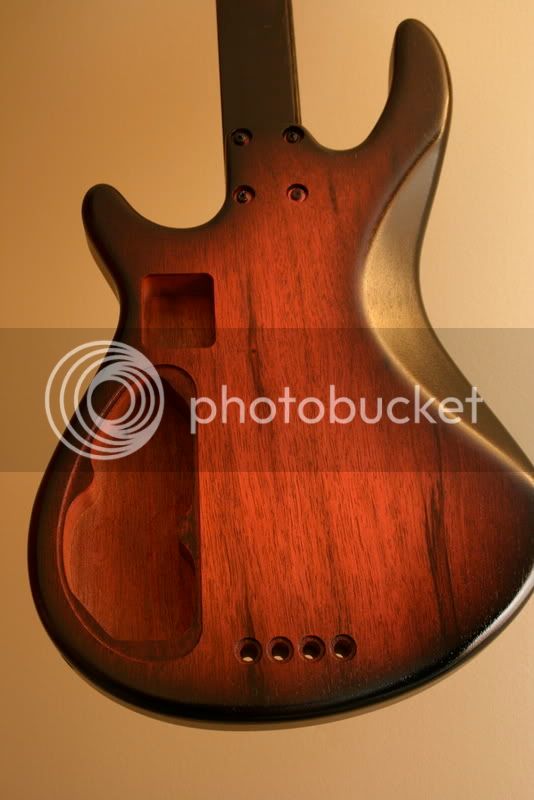 Part of me thinks it may be a bit dark, but another part wants to leave well enough alone.
I may give it a light sand in the center to brighten it up a bit.

I'm trying to decide if I should mess with it some more or just shoot clear and call it a day.

Go clear. It looks great, and will look even better with the clear on it.
M

It looks great!! What kind of fingerboard and pickups are you going to put into it?
D

watershed...can you PLEASE do me a favor...when you get your bridge on, can you tell me how much room you have from your saddles (line of inotation) to the back of the base.  I want to see if the G4 has enough room to mount a vintage Kahler whammy I picked up on ebay.  Please make sure you measure from the sides and not just down the middle.  THANKS!!!!

Well, the project is moving along.

I decided to leave well enough alone and shot a few coats of clear.
Here it is sanded and buffed still on the stand: 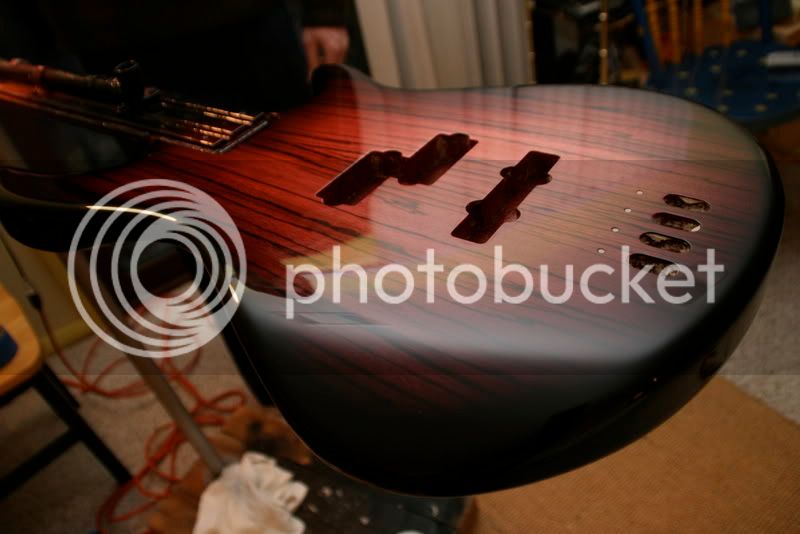 Here you go dmraco, got the bridge on and snapped a pick for you.  It's not intonated but this should help: 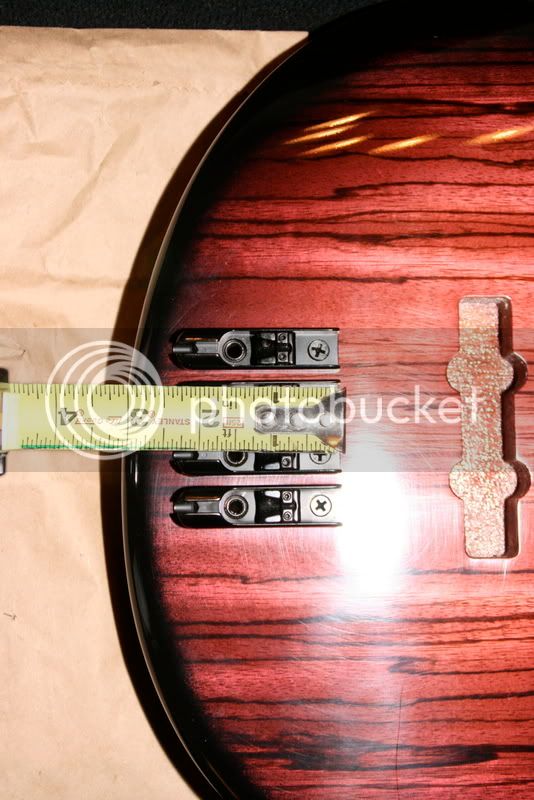 It's got a 5 piece wenge neck with brazilian rosewood board to go with it.  There are two purpleheart strips.
EMG PJ pickups.

STUNNING finish.  Miles deep and an awesome color.  Is it nitro?
W

dbw said:
STUNNING finish.  Miles deep and an awesome color.  Is it nitro?
Click to expand...

Sort of.  I have been using a pre-catalyzed nitro.  It really behaves much like “ordinary” nitro from an application/working with standpoint.
It has a slightly higher solid content for quicker buildup and claims to be a bit more resistant to abuse, which I would agree with.
It sure buffs to a high gloss and the curing process is shorter as its not entirely about evaporation.

Here we go.
Got it all together over the weekend. 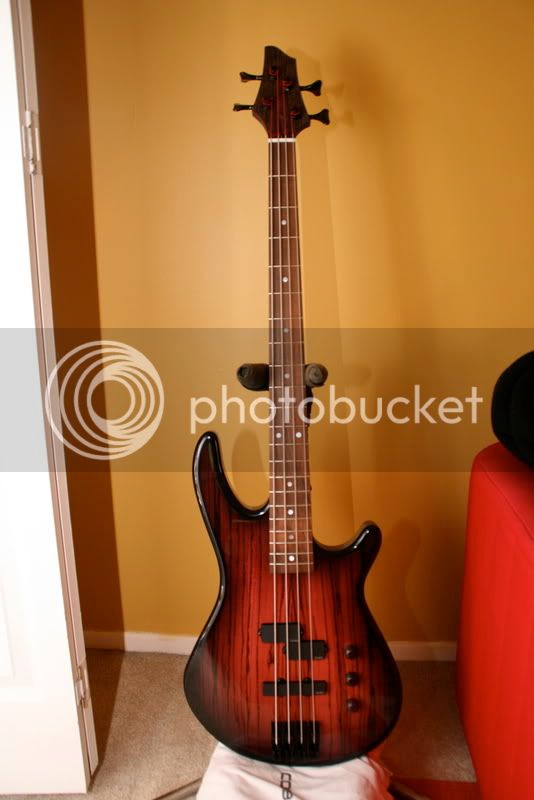 It can look real dark in low light: 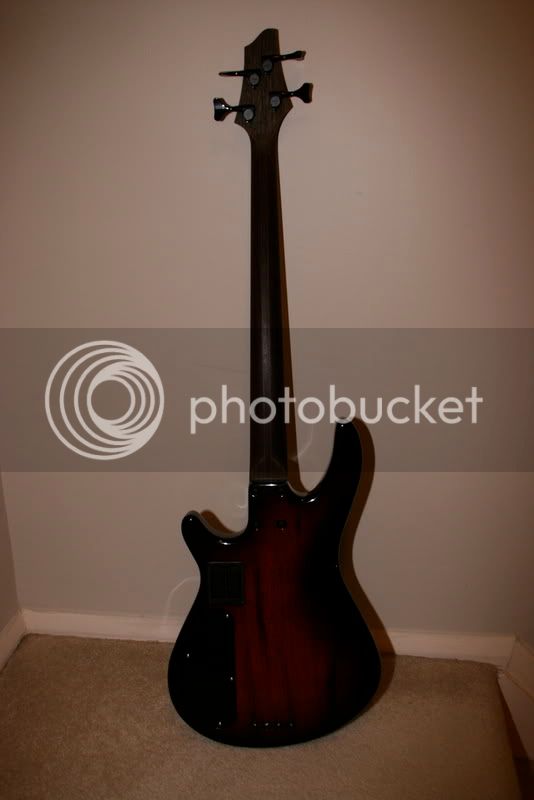 Wonderful neck.  Wenge with purpleheart stringers and a braz. rosewood board. 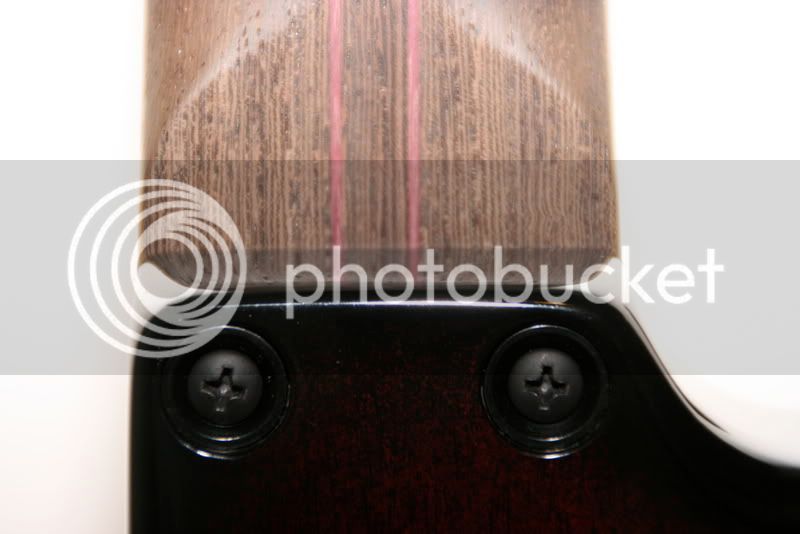 I hope she likes it.

Hope she likes it ?

Just make sure she still has time for you.
You must log in or register to reply here.

Help!! with spraying water base lacquer